We Live In A Fucking Police State 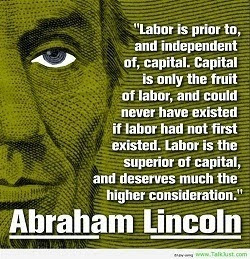 Baltimore, Violence, and the Wages of "Revolution"


A mom, a disabled son, and a home that blazed amid Baltimore's riots


Black soot covers the two-story house like a dark shadow. The roof has collapsed, and a bright red sign proclaims the home has been condemned.

Until a few weeks ago, when the riots roiled Baltimore, this house at Hilton Street and Piedmont Avenue was home for Laporsha Lawson and her severely disabled son, Khai'Lee Sampson.

Give to TSA Watch

The fundraising drive at TSA Watch has been stuck at $6,921 for weeks. The TSA is sexually assaulting people at airports in this country every day. We and many other organizations have been documenting it for years. I don't know what else people need to know in order to care.

Oh, wait a minute -- for some people, getting robbed is more serious than getting sexually assaulted. Okay, fine. The TSA is robbing people at airports in this country every day.
Read more »
Posted by Lisa Simeone at 8:28 AM

Last August I wrote a post reporting that the non-profit civil liberties organization Judicial Watch was suing the TSA to gain access to documents outlining the sexual abuse of travelers at the hands of TSA workers. I said that Judicial Watch was joining a long line of of other organizations and individual people who had also tried to sue the TSA to get information, and that the TSA, predictably, had stonewalled.
Read more »
Posted by Lisa Simeone at 9:21 AM

There are so many videos on YouTube of speeches by the great Chris Hedges. You can have a field day watching them. I feel honored that I've met Hedges and broken bread with him several times. He is one of the most upstanding, virtuous people I have ever met. He is a poet, a philosopher, a visionary, a historian, a Cassandra for our age.

His books are as infuriating as they are inspiring. And if you don't read his weekly column at Truthdig or Nation of Change or Truthout -- well, put the frigging New York Times and Washington Post aside once in a while and read somebody with integrity, somebody who doesn't suck up to power, who is unafraid to tell the unvarnished truth. If you have time to read a mainstream newspaper or watch network TV, you have time to read Hedges. The following quote comes about 3:30 into the clip:


"How do you revolt?
". . . I want people to understand when you seriously revolt what the state does to you.
". . . revolt itself is a moral imperative. That asking the question as to whether it can succeed is the wrong question. Revolt is not finally about what we achieve . . . revolt is about what we become.
". . . I don't fight fascists because finally I believe that I will win. I fight fascists because they are fascists." 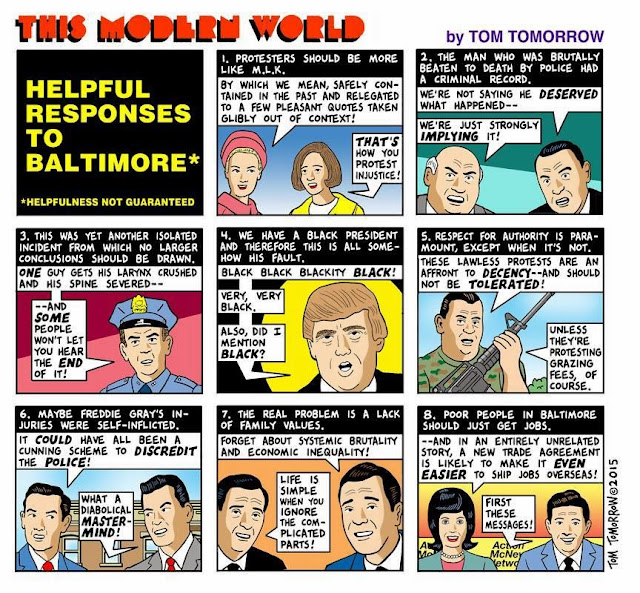 Citizens, Not Subjects, by Chelsea Manning

Chelsea (formerly Bradley) Manning in The Guardian. Of course we have to go to a UK paper to read this, since the press in the US is too busy with baseball season, deflated footballs, and hawk Hillary.

We're citizens, not subjects. We have the right to criticize government without fear.

. . . The government argued that there was no distinction to be made between any media organizations that provided information to the public, if the government felt would “aid” the enemy: whether such information was published by a small-time blog, a controversial website like Wikileaks, a national newspaper like the Washington Post, or an international one like the Guardian, to the government, they can all be “aiding the enemy.”
After 9/11, a dedicated office of lawyers specializing in novel applications of law for national security issues, the National Security Division (NSD), was created; and now, with a small caseload and an enormous amount of resources, this division of the Department of Justice has been waging a quiet war against the media, their sources, and the right to free speech and a free press, using the growing national security and surveillance apparatus to prosecute various cases and, occasionally, target the media.

Consider the Department of Justice’s admission in May 2013 that they had secretly seized sensitive office, home, and cellular telephone records from more than 20 reporters working for the Associated Press while investigating a leak leading to a 2012 AP news story reporting on an operation foiling a terrorist plot. The president of the AP, Gary Pruitt, called the actions a “massive and unprecedented intrusion” and noted that the government’s actions were creating a profound chilling effect on sources and members of the press. The president personally defended the actions of the Department of Justice, saying: “I make no apologies.”

. . . In Pigtown, where looters struck at least four businesses, an online fundraiser raised more than $1,300 in four days, and a spring cleanup last weekend — which typically has a turnout of about a dozen people — drew more than 100 volunteers, said Ben Hyman, executive director of Pigtown Main Street. The four businesses affected in his organization's domain have all reopened, he said.
"The support for me was so overwhelming I couldn't believe it," said Fennoy, who opened the restaurant in 2007. "I just wish all areas would lend helping hands like those that have lent helping hands to me."

This is what Baltimore does. This is what any city would do. Neighbors helping neighbors. I'm not surprised CVS is rebuilding here.
Needless to say, those who advocate burning, looting, and rioting, whether in person or in hiding behind their computer screens, aren't the ones coming out to help clean up and rebuild. Gee, I'm shocked.
Posted by Lisa Simeone at 7:46 AM

Mr. Fish on the Baltimore Protests and Riots

Once again, the great Mr. Fish: 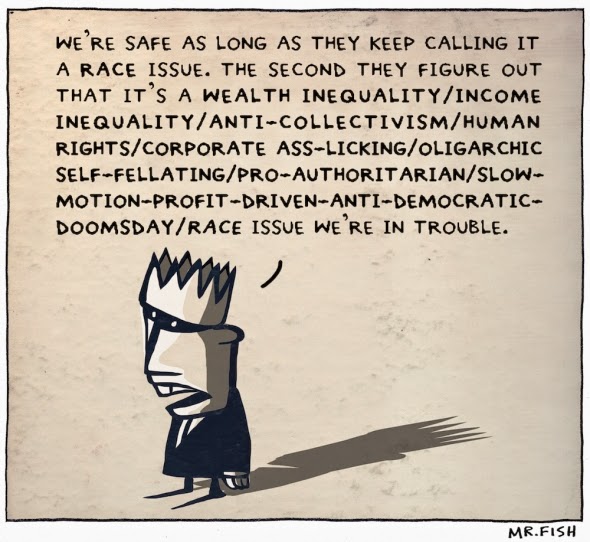 State's Attorney Marilyn Mosby is bringing criminal charges against all 6 officers, including one charge of "Depraved Heart Murder" against one officer, Caesar Goodson. The other officers charged with a variety of criminal offenses are: Lt. Brian Rice, Sgt. Alicia White, Ofc. William Porter, Offc. Garrett Miller, Ofc. Edward Nero. Charges include assault, misconduct in office, false imprisonment, and others.

Mosby took a lot of heat when she was elected Baltimore City State's Attorney, because of her youth and relative inexperience. There was a lot of carping in legal circles. Well, she certainly gave a straightforward, no-nonsense, kick-ass press conference. She also emphasized that this is an on-going investigation, and that she expects everyone to cool it (my words, not hers) and not engage in any nonsense, that the procedure requires peace and time and peace. And did I mention peace? No violence.

WBAL-TV reporter Jayne Miller, who has done such a great job (she's a very experienced reporter) during this whole time, stressed "an enormous development in this case," the fact that the arrest of Freddie Gray was illegal from the get-go. There was no probable cause to arrest Freddie Gray.

It was a calm day and night in Charm City yesterday. That doesn't mean there were no protests -- there were. Good, disciplined, strong protests. But there was no repeat of this past Monday night with burnings and lootings and violence and mayhem. The National Guard is still here, and the curfew is still in effect, though many businesses, especially bars and restaurants have appealed to the city to lift the curfew. So far, that's not happening. Mayor Stephanie Rawlings-Blake has said that she's not averse to lifting it early if conditions warrant it. Meanwhile, there's plenty of looting going on elsewhere:

Email ThisBlogThis!Share to TwitterShare to FacebookShare to Pinterest
Labels: Baltimore, crime, Freddie Gray, looting, poverty, protest, resistance, Twitter
Newer Posts Older Posts Home
Subscribe to: Posts (Atom)
"The man who asks of freedom anything other than itself is born to be a slave." -Alexis de Tocqueville