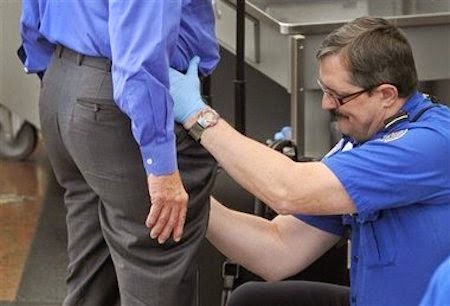 ADDENDUM March 1, 2016: Since I originally wrote this post, two years ago, the weasely, lying, criminal TSA has, of course, eliminated several of the pages to which I linked. If you click on those links today, you'll get an error message: "Page Not Found." Why is it not found? Who knows? Because the TSA is incompetent? Because it doesn't want people to learn what its policies are, we the people who pay every stinking salary at that stinking agency? I don't know. But I do know that I've gone through hundreds of past posts I've done at TSA News and corrected, repeatedly, broken links, only to find, later, that they become broken once again. I give up. The TSA is trying to hide its policies because its policies are abusive. And when it doesn't outright hide them, it tries to obfuscate them with weasely language. So take what you will from this post. Everything I wrote here is accurate and true and was backed up with empirical evidence. The TSA's hiding or removing of that evidence is par for the course.
------------------------------------------------------------------
Charlotte Ann Kimbrough is a 57-year-old retired law enforcement professional. She worked for 32 years in an administrative capacity with the U.S. Attorney's Office, the U.S. Postal Inspection Service, and other federal law enforcement agencies. She has two metal hip replacements.

She told me she hadn't flown in a few years. So she was unfamiliar with TSA procedures. When she went through the metal detector at the St. Louis airport on Thursday, May 22, 2014, she alarmed it. She explained to the TSA agents that she has two metal hips. She thought they would wand her. She was wrong.

Our readers know why. The TSA stopped using handheld metal detectors as of October 30, 2010, when John Pistole implemented the Reign of Molestation, and as travelers can attest. If you see a TSA clerk using a metal detector wand today, it's a rare occurrence, and is not TSA policy. Patdowns are the policy.

Kimbrough was taken aside and told she needed to have a "pat-down." She was asked if she wanted to be taken to a private room. "No way," she said. "I don't believe these things should be done in secret."

Still, she didn't know what to expect. Since she had never had an "enhanced pat-down," she was shocked at what happened.

"The woman groped my crotch -- twice. She went underneath my dress. I knew I had to be calm for the man I was traveling with, so I didn't say anything. But he could see the look on my face. He started yelling. They got the woman who was groping me out of the way and brought in a boss, who tried to stop the situation from escalating."

Kimbrough's companion demanded a TSA complaint form.
Ha! We all know what happens to those. They go into the circular file. At most you might get a form letter.
Kimbrough told me she doesn't relish the thought of having to fly home, nor of taking future trips already scheduled with her companion. She also thought that going through the strip-search scanner would obviate the need for a grope. I disabused her of that notion. As tens of thousands of people can confirm, as we've written repeatedly, and as the TSA itself proclaims, just because you go through the scanner doesn't mean you won't also be pulled aside for a grope. The two aren't mutually exclusive.
For the record, TSA clerks are not supposed to go under your clothing, yet as we know they do it all the time. Just ask Lynsie Murley. Or Carolyn Durand. Or Sommer Gentry. Or Maggie Yates Buckenmayer. Or Jamelyn Steenhoek. Or this man. Or these people. Or these. Or these.
From the TSA website:

A passenger should not be asked to remove or lift any article of clothing to reveal a sensitive body area.

With such weasely language ("should not"), I suppose the clerk in this case could claim she didn't ask Kimbrough to do anything; she just went under Kimbrough's skirt all on her own.
Kimbrough also said something very interesting about her reaction, confirming what we've been writing here for years about the effect the TSA is having on the country:

"I do have anger at myself, that I let her do it to to me. And the more she did it, the more I let her. I keep getting feelings of guilt."

Bringing out my broken record again, one of the most pernicious effects of authoritarianism is that it engages its victims as complicit in their own abuse. Kimbrough has no reason to feel guilty. She did nothing wrong. Yet the system in place -- a system entirely predicated not on security but on compelling obedience -- encourages her to believe she did.
Kimbrough also drew a parallel that many of us have drawn, one that's entirely appropriate yet that elicits howls of derision from people more comfortable living in denial than in facing reality -- she brought up the "N" word: "Nazi."
You Godwin adherents can stuff it.
As law professor Butler Shaffer has written about the TSA:

Its function has absolutely nothing to do with combating “terrorism.” There are no more “terrorists” running loose in this country than there were “bogeymen” with which I used to scare my little sisters when we were children. One need only read Viktor Frankl’s book, Man’s Search for Meaning to discover that, like Frankl’s Nazi concentration camp experiences, the TSA’s role is to degrade and dehumanize people; to remind  us that the state can humiliate us to any degree it chooses whenever it chooses, and that those who resist will be punished and put on secret lists for some undefined future use.

Kimbrough went on to say that she wished she had resisted somehow, even perhaps kicked the TSA agent groping her. I told her that would've gotten the police called and her charged with assault. They can touch you all they want, I said, but you can't defend yourself.

There are other ways to resist.
Kimbrough told me her companion is a frequent flyer. So I asked her how it was possible that he hadn't seen these searches conducted before. Her reply:

"I don't think people are paying attention. I mean, it's going on right in front of everybody, but I guess until it happens to them they don't care."

Ah, well.
I'll add Charlotte Kimbrough's name and account to the vast list of TSA crimes and abuses. Chalk up another one for the Land of the Free and the Home of the Brave.

(Cross-posted at TSA News)
Posted by Lisa Simeone at 1:44 PM

Email ThisBlogThis!Share to TwitterShare to FacebookShare to Pinterest
Labels: abuse, airport, assault, authoritarianism, Godwin, obedience training, security, travel, TSA
Newer Post Older Post Home
"The man who asks of freedom anything other than itself is born to be a slave." -Alexis de Tocqueville