Uncle Sam Wants Your Passwords - Deal With It 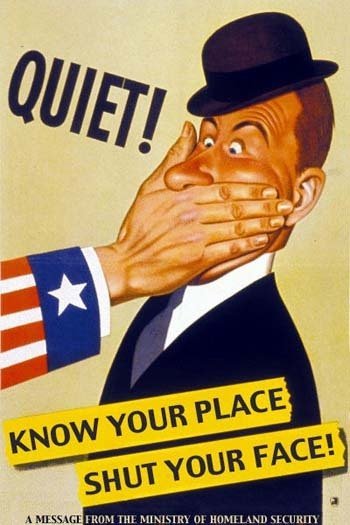 In a revelation that only somebody living under a rock could possibly find surprising, the federal government wants not only your passwords, but the encryption on your passwords.

You peon, how can you be so stupid as to think you have rights?

Haven't you learned anything over the past 12 years?

Oh, wait, I forgot -- If You Haven't Done Anything Wrong, Then You Don't Have Anything To Worry About.

Declan McCullagh of CNET, one of the best reporters on civil liberties from one of the best publications that covers them, writes about the fact that Uncle Sam has been demanding the private passwords of citizens and the encryption codes that go along with them.

Have any of the big boys -- Google, Yahoo, Microsoft, Apple, Facebook, Verizon, etc. -- complied? They say they haven't, but who knows? They've been handing over our information to the government for years. Including financial information. Including the information of other citizens in other countries; including our allies. Including private conversations by Congressional reps.

Are they actually protecting the encryption, or will we find out years from now that, oops, 'there was a secret order and we had to comply and oh so sorry but your private information has been comprised nothing we can do about it after all we're fighting a War on Terror(TM).'

Before you roll your eyes and click away with the usual nonchalance about your civil liberties going down the toilet, ponder this: if someone has your password, they can impersonate you. They can send emails and post comments on blogs and news sites that not only say things you would never say, under your name, but things that could get you in trouble. Things that could get you prosecuted.

Think it can't happen? Think that this power would only be used against The Big Bad Terrorists?

Then you should click away because you're delusional. And you obviously haven't followed the news for years. Years. Because it's already happened.


WASHINGTON – A USA TODAY reporter and editor investigating Pentagon propaganda contractors have themselves been subjected to a propaganda campaign of sorts, waged on the Internet through a series of bogus websites.

Fake Twitter and Facebook accounts have been created in their names, along with a Wikipedia entry and dozens of message board postings and blog comments. Websites were registered in their names.

The timeline of the activity tracks USA TODAY's reporting on the military's "information operations" program, which spent hundreds of millions of dollars on marketing campaigns in Iraq and Afghanistan — campaigns that have been criticized even within the Pentagon as ineffective and poorly monitored.

Reporter Tom Vanden Brook had this to say about it:


"I find it creepy and cowardly that somebody would hide behind my name and presumably make up other names in an attempt to undermine my credibility," Vanden Brook said.

So if it's already happened to him, why can't it happen to others?


"This is the work of somebody who knows what they're doing. They have some experience of covering their tracks. This is probably not the first time they've done something like this," said Beal, CEO of Trackur, an online reputation tracking service.

But then, as I like to say, meh, 4th Amendment, Schmourth Amendment. The whole Bill of Rights is just a quaint document anyway, right? After all, your president already claims the ultimate power -- the right to determine who lives and who dies (it's called the NDAA, for those of you still asleep at the wheel) -- what's another nail in the coffin?

Then again, perhaps I shouldn't be so hard on my fellow Americans. A few of them are paying attention:


In a startling and heartwarming display of courage and moxy, people all over America actually raised their eyebrows for a minute or so last week at the announcement of the coming indefinite detention of Americans section of the 2012 NDAA. There were unsubstantiated rumors that the Peoria Journal Star newspaper received a panicked call from a local man reporting that a woman in his neighborhood lost control and dropped her nail file on hearing the news, but that after a hurried conference with an unnamed Homeland Security official the Star's editor declined to run the story out of concern that public order might break down in the city. Fascism obviously has no chance in America. No chance. People are fighters. They don't just roll over for travesties like this. In some places they even put the words "Live Free or Die" on their license plates. And they raise their eyebrows for a minute. Before changing the channel.


Daniel Patrick Welch had it right -- we are the ones we've been waiting for:

. . . isn’t it way past time for Americans to choke on our own bloated rhetoric, the constant, nauseating peristalsis of Orwellian bullshit that flows from the agents of the Lone Superpower war machine? In one theater after another, as Americans graze blissfully unaware on our diet of hamburgers, housewives, and media hash, the empire is sowing the seeds of its own destruction and hastening its own demise.

. . . Ever the dutiful technocrat, The Obomber epitomizes the infinitely more dangerous potential of the yes-man over that of the ideologue.

Welcome to the post-racial society, crow the enthusiasts of a rigged and money-drenched electoral system that feigns democracy while undermining it at every possible turn. Americans aren’t interested in genuine democracy, don’t experience it at all in virtually any aspect of our daily lives, and wouldn’t recognize it if it jumped up and bit us in our collective transfat ass.

Besides, civil rights are for silly whiners who still think "democracy" is about being able to protest in the streets. Obviously they missed the memo: It's about being able to choose your favorite brand of sneakers or your choice of which housewives to obsess over. Duh! Way to go: “we” elected a black guy! Big deal—Caligula elected a horse.

. . . Orwell and Kafka lost together in the miserable plot(s) of Inception could not have constructed such a horrific nightmare. There is no dystopia yet written that can rival the brave new world in which we are living today. The worst part is that, while drones patrol the skies, from Libya to the Mexican border to the streets of our inner cities where the 2-million-plus inhabitants of our Prison Planet grow—the largest in the world, another American triumph—in the midst of this horror, debate rages on about how to tweak a broken system, about how best to enrich the already-haves, about the values of recycling and gluten-free beer. John Connor is not coming back, folks. We are the ones we’ve been waiting for.

And as long as we put up with it, and continue to look the other way -- as long as it happens to "those" people and not to "us" -- we have no one to blame but ourselves when the shit-storm rages down on our heads. Because eventually, inevitably, it will.

If you still don't understand what Martin Neimöller said by now, then sorry, you deserve what you get.
Posted by Lisa Simeone at 11:07 AM

Email ThisBlogThis!Share to TwitterShare to FacebookShare to Pinterest
Labels: 4th Amendment, Civil liberties, crime, empire, fascism, fraud, Martin Niemoller, NSA, surveillance
Newer Post Older Post Home
"The man who asks of freedom anything other than itself is born to be a slave." -Alexis de Tocqueville