We Live in a Police State 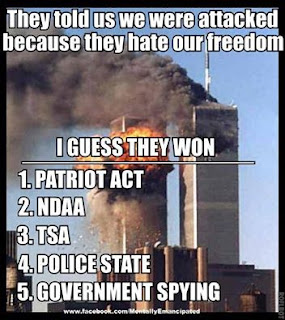 We live in a police state. Anybody who doesn't recognize that fact -- or who cries "hyperbole!" "exaggeration!" -- has his head up his ass. There's not only One Kind Of Police State And One Kind Only. And a police state doesn't have to spring fully formed like Athena from the head of Zeus. It can -- and usually does -- develop step by incremental step, as one by one, people's rights start to diminish and finally disappear.


As militarized police proliferate and become increasingly abusive. And yet more abusive. And more. And still more. (And remember Christopher Dorner?) As laws are passed that circumscribe ever more tightly people's movements and punish infractions more severely. As the prison industry bloats, for profit, no less. As our president expresses his "disappointment" at the release from jail of a decorated journalist -- who was in jail thanks to the president himself, because said journalist had the temerity to report on the president's drone-murder campaign. As the president explicitly goes back on his campaign promises about whistleblower protection. As he claims the right to kill anyone he wants, whenever he wants, wherever he wants. (But keep voting for the Dems and Repubs, people; that'll teach 'em.) As the word "security" becomes the be-all and end-all of a society's existence. As people become more sheep-like and pathetic and buckle under to what their overlords want them to do, and exhibit contempt for any dissenters. As the media plays along.

That's the country we're living in. Just because you can buy all the crap you want and choose among 60 different kinds of sneakers doesn't mean you're free.

Take a look at this article and this video, and then tell me we're free. Wait -- lemme guess -- he didn't get the shit kicked out of him and get hauled off to jail; therefore, we're free. Leaving aside the profound stupidity and willful ignorance of that sentiment, take a look at the copious evidence at PINAC, where people have had the shit kicked out of them and been hauled off to jail, and then come back and tell me we're free.
Posted by Lisa Simeone at 11:09 AM

Email ThisBlogThis!Share to TwitterShare to FacebookShare to Pinterest
Labels: Civil liberties, crime, empire, fascism, NDAA, police, police state, terror, terrorism
Newer Post Older Post Home
"The man who asks of freedom anything other than itself is born to be a slave." -Alexis de Tocqueville