We Like Your Guns, But Pardon Us While We Confiscate Your Tampons 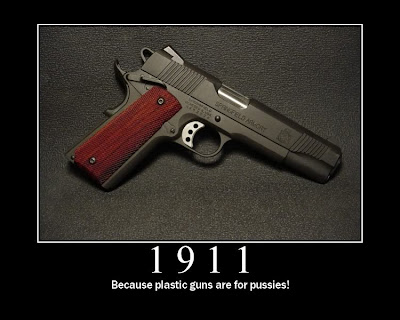 No, you can't make this shit up.

This country is so far gone, and the denial about that fact so intense, that you probably won't believe this story.

At the recent Texas state legislature debacle, where women were told exactly what the powers-that-be think of them, guns were allowed into the Senate chamber, but feminine hygiene products weren't.

That's right, you could take your gun, but you couldn't take your tampons, sanitary napkins, or adult diapers. The latter three categories were confiscated.

One woman, a diabetic, needed some extra protection:

Paula Chaney of Georgetown, Texas, said an officer took the food she needs to deal with diabetes, then held up her purple wrapped maxi pads and started waving them around and yelling.
Chaney reported this to the supervising officer who yelled at her an marched her to the elevator, after which she left without her maxi pads.

Well, why not? They search and humiliate people at the airport, why shouldn't they do it everywhere else, too?

Email ThisBlogThis!Share to TwitterShare to FacebookShare to Pinterest
Labels: abortion, abuse, American values, stupidity, Texas
Newer Post Older Post Home
"The man who asks of freedom anything other than itself is born to be a slave." -Alexis de Tocqueville