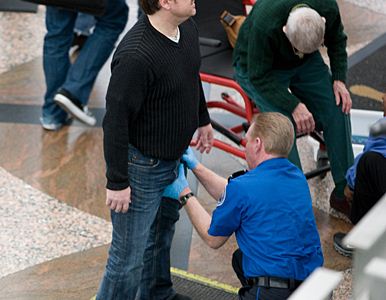 Judge Royce C. Lamberth, chief judge of the Federal District Court for the District of Columbia, ruled that the TSA-style searches conducted on Guantanamo prisoners -- where guards grope the genitals of prisoners -- are no longer allowed.

And, mirabile dictu, he called the government's actions out for what they are: "yet another exaggerated response." Sorta like the entire post-9/11 national security apparatus.

Although Lamberth's decision was based partly on religion, his ruling has, obviously, serious civil liberties implications. One wonders if an enterprising lawyer out there will take this decision and run with it -- in other words, use it to show that the genital-groping going on at airports is also illegal and should be stopped.

UPDATE July 18, 2013: The Obama administration immediately appealed the court ruling. And won. Because the Obama administration, in addition to torturing hunger-striking prisoners at Guantanamo, apparently wants to humiliate those of them who aren't on hunger strike. The genital gropes will continue.

(Cross-posted at TSA News)
Posted by Lisa Simeone at 3:25 PM

Email ThisBlogThis!Share to TwitterShare to FacebookShare to Pinterest
Labels: abuse, Civil liberties, Guantanamo, sexual assault, TSA
Newer Post Older Post Home
"The man who asks of freedom anything other than itself is born to be a slave." -Alexis de Tocqueville