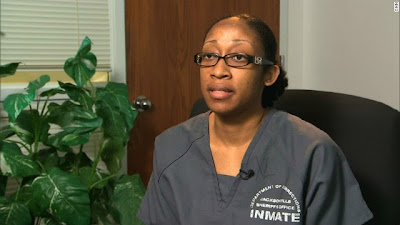 An excerpt from Psychopolitik (hat-tip to Mr. Fun):


In Florida, George Zimmerman, a wannabe cop & self-assumed neighborhood watchman in a gated community, stalked, picked a fight with, & executed a teenage boy. After a trial that only took place due to protests (he originally wasn’t even charged), he walked.
Same state. A woman fends off a violent, abusive husband by firing warning shots, striking no one. She is charged, convicted, & sentenced to 20 years in prison.
Why? Simple: in the first case, the teenage boy George suspected & tracked down was black. In the second, the woman who clearly was defending herself was black. She didn’t even get to invoke “Stand Your Ground,” as it was blocked . . . .

That's right. A woman who was in danger in her own home -- as so many women are -- tried to protect herself in that home. She didn't kill anyone. She didn't even hit anyone with the bullets she fired. She fired warning shots. And she's going to jail for 20 years.

She has a completely clean record -- unlike George Zimmerman. But she made the mistake of being born black.

The "Stand Your Ground" law didn't help Trayvon Martin, and it didn't help Marissa Alexander. Tough luck; that's how things roll in the Land of the Free.

But nah, no racism at work here.
Posted by Lisa Simeone at 10:05 AM

Email ThisBlogThis!Share to TwitterShare to FacebookShare to Pinterest
Labels: crime, George Zimmerman, justice, law, Marissa Alexander, race, Trayvon Martin
Newer Post Older Post Home
"The man who asks of freedom anything other than itself is born to be a slave." -Alexis de Tocqueville