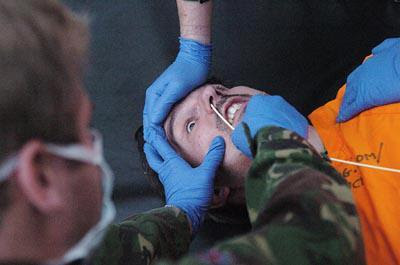 But ignorance is popular, and Judge Collyer is apparently trying to win a popularity contest:

“There is nothing so shocking or inhumane in the treatment of petitioners — which they can avoid at will — to raise a constitutional concern that might otherwise necessitate review,” she wrote.
Collyer also found that the detainees had not shown that the military’s policy is “unreasonable.”

Watch this video clip, Judge Collyer, and then come back and tell me "there is nothing so shocking or inhumane in the treatment."

My friend Tarak Kauff is on a fast in solidarity with the Guantanamo prisoners. He's trying to bring attention to their plight. Tarak has lost 24 pounds and looks like a ghost.

Do most Americans care? Do they give a shit about the torture that's going on in their names?

They, too, are happy to parade their brutality and ignorance.

Some day, there will be a reckoning.
Posted by Lisa Simeone at 9:13 PM

Email ThisBlogThis!Share to TwitterShare to FacebookShare to Pinterest
Labels: crime, empire, Guantanamo, justice, torture
Newer Post Older Post Home
"The man who asks of freedom anything other than itself is born to be a slave." -Alexis de Tocqueville