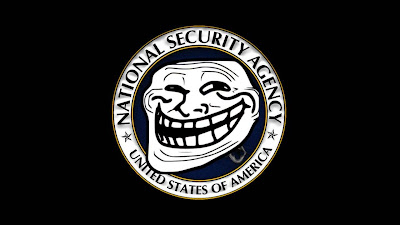 No surprise, no surprise at all. The Amash amendment failed. The White House won.

The worthless wankers in Congress -- in the House anyway -- sided withe the president: they voted to allow the NSA to keep collecting whatever data it wants, whenever it wants, however it wants, as much as it wants, for as long as it wants.

Gen. Keith Alexander convened a private, secret, closed-door session at the last minute yesterday, no doubt telling the reps that The Terrorists Are Everywhere™ and that, therefore, they have to allow the NSA to continue collecting info on all of us. Because all of us, in case you haven't figured it out by now, are potential terrorists.

Oh, well. We reap what we sow. Most of our representatives ceased representing anything but corporate interests long ago. And if you still don't get that, you need to take a look at the votes on this amendment: Wired breaks it down, showing that those reps who received the most in bribes campaign contributions from the war and "security" industries voted against it.

The puppet show that is the United States of America continues to give performances. Its signature role is that of a "free country." Hey, it's bad acting, but most people don't mind. They're looking for an action flick, and with Seal Team 6 fresh in their minds, they're happy to hang on, hoping for a repeat. The fact that they might be the object of the next thrilling raid doesn't occur to them. After all, If You Haven't Done Anything Wrong, You Have Nothing To Worry About.
Posted by Lisa Simeone at 8:58 PM

Email ThisBlogThis!Share to TwitterShare to FacebookShare to Pinterest
Labels: Amash amendment, American values, Civil liberties, Congress, NSA, Obama, spooks, terror, terrorism
Newer Post Older Post Home
"The man who asks of freedom anything other than itself is born to be a slave." -Alexis de Tocqueville