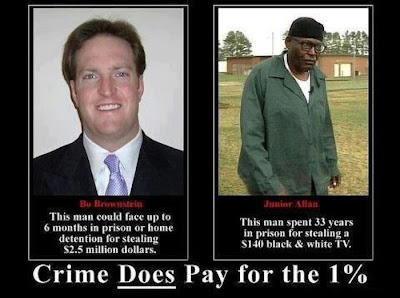 
RALEIGH, N.C. — A man sentenced for stealing a TV nearly three decades ago walked out of prison Friday as a free man.
In 1970, Junior Allen went to prison for stealing a $140 TV set from 87-year-old Lessie Johnson in Johnston County.
Johnson's family said he roughed her up on his way out. However, nothing about an assault came up at trial nor was Allen ever charged with one.
Allen is on his way to his home state of Georgia, where he plans to work for his sister. Authorities in that state will monitor his parole.
If he does not break the law and follows the terms of his release, he is free and clear in five years at the age of 70.
http://www.wral.com/news/local/story/117412/

Bo Brownstein, on the other hand, ended up doing 1 year and 1 day.

Hey, baby, American justice.
Posted by Lisa Simeone at 11:23 AM

Email ThisBlogThis!Share to TwitterShare to FacebookShare to Pinterest
Labels: American values, class, corporate crime, crime, hypocrisy, justice, race, slavery
Newer Post Older Post Home
"The man who asks of freedom anything other than itself is born to be a slave." -Alexis de Tocqueville