Americans: TSA abuse is fine, just don't make me pay for my bags! 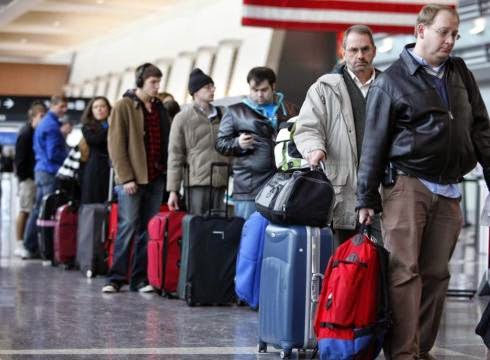 Yet another article in the mainstream press with people whingeing about the fact that they have to -- gasp! -- pay a few extra bucks to carry on and/or check their luggage.

This time, it's an article in the New York Times about Frontier Airlines. To the NYT's credit, it points out that passengers are still getting a better deal today than ever before in the history of commercial aviation. But when do Americans let facts get in the way of a good kvetch? People all over the blabbosphere and in the comments at that article are, of course, o-woe-is-me-ing the fact that they have to pony up extra money.

Airlines have found another way to make money: Frontier Airlines is now charging for the privilege of carrying a bag on board. A small “personal item” is still free, but if you need to use the overhead bin, you’ll generally be paying $20 to $50.
Don’t complain too much. Passengers actually are still getting close to the best deal they’ve ever gotten, despite sharp rises in baggage and change fees over the last decade.
In 1979, the first year after airline deregulation, the average pretax domestic round-trip airfare including bag and change fees was $187, which is equivalent to $599 after adjusting for inflation. For the next 26 years, real airfares tumbled; 2005’s average airfare was $332 in 2013 dollars.

Just as there's a petition making the rounds urging Congress not to pass the euphemistically named Transparent Airfares Act, so, too, is there more outrage over these luggage fees than there is over the TSA. And no, I'm not in favor of the airlines gouging customers; that's not the point.
Here's the comment I left at the NYT article (all NYT comments are moderated, so since I just left it, it's still pending approval):


Here's a radical idea -- take less stuff. Most Americans carry so much crap when they travel; then they complain when they have to pay a few extra bucks, whether it's for checked bags or carry-ons.
Regardless, it's telling that there's more angst over this nonsense than over the fact that the TSA is an abusive gauntlet. Oh, well, that's the American way: bully me, harass me, rob me, physically assault me, just don't make me pay more!

Cross-posted at TSA News
Posted by Lisa Simeone at 8:59 AM

Email ThisBlogThis!Share to TwitterShare to FacebookShare to Pinterest
Labels: airport, American values, fees, luggage, travel, TSA
Newer Post Older Post Home
"The man who asks of freedom anything other than itself is born to be a slave." -Alexis de Tocqueville