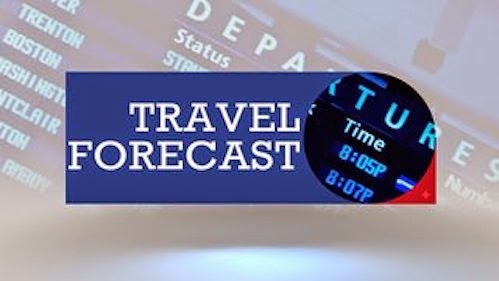 As if on cue after yesterday's post about train travel in the U.S., the largest airline trade association in the country has just come out with a prediction about summer air travel. And to anyone who thinks the TSA has put a damper on that travel, the stats appear to indicate otherwise.

. . . about 210 million passengers will fly on the nation's carriers between June and August, up 1.5 percent from last year.
The outlook includes 29.9 million passengers on international flights, the highest level ever, the group added. The top nonstop destinations from the United States were Canada, Mexico, United Kingdom, Germany, and Japan, based on flight schedules.

The forecast about foreign tourists coming to the U.S. contradicts recent past experience, where the American tourism industry was worried about the decline of foreign travelers, citing unwelcoming if not downright abusive practices by customs, immigration, and security officials.
Foreigners might want to acquaint themselves with the experience of Hyunjoo Kim of Korea, or Alban Gerhardt of Germany, or musicians from around the world who refuse to come to the U.S. anymore, or, hey, any of thousands of other people.
Yesterday a reader named Susan J. Barretta left a comment here, stating:

The travel stats do not bear out that we have left "air travel in droves" at least enough to have a major fiscal impact on the airlines. Airline passengers peaked in 2008 and the introduction of intrusive screening methods in 2010 shows no material impact on ridership. In other words, those of us who have stopped traveling because of TSA's invasive screening methods are too few to have an impact.

Alas, she's right.
Most Americans are perfectly content to subject themselves and their children to abuse to get on a plane. I've been saying for years that I don't believe this state of affairs will change in my lifetime. I'm sorry to say that I think the evidence, along with the latest forecast, bear me out.
(Graphic courtesy of The Weather Channel)
Posted by Lisa Simeone at 6:16 AM

Email ThisBlogThis!Share to TwitterShare to FacebookShare to Pinterest
Labels: airlines, airport, forecast, foreign tourism, foreign travel, prediction, security, travel, TSA
Newer Post Older Post Home
"The man who asks of freedom anything other than itself is born to be a slave." -Alexis de Tocqueville