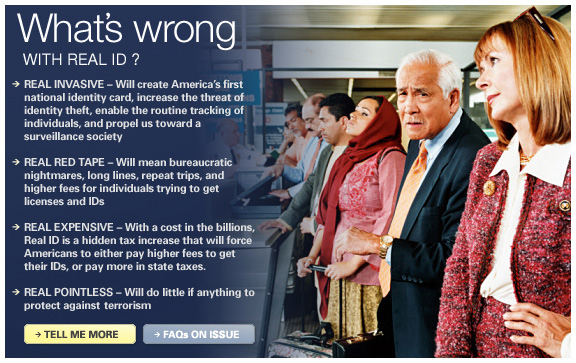 As I wrote in this post on January 7, 2016, Edward Hasbrouck is a consistently reliable source of information on all things security -- and faux security. His excellent website, PapersPlease, is a breath of fresh air in the hothouse atmosphere of the travel blabbosphere. So it's no surprise that he has been predicting from the beginning that the Department of Homeland Security's attempt to impose yet more stupid regulations would fizzle. He said DHS would blink, and it has.


I'm talking about so-called Real ID and DHS's insistence that after such-and-such a date (constantly changing) the TSA would no longer accept as ID driver's licenses from a list of states that hadn't acquiesced to DHS demands. In other words, DHS was claiming that you would be prevented from flying domestically if you held a driver's license from a supposed rogue state (Alaska, California, Maine, Texas, etc.). I'll let Ed tell the story:

Accurate public understanding of what’s going on is not helped by the fact that the U.S. Department of Homeland Security, in official statements by its highest officials, on its official website have been telling out-and-out lies about what the law does and doesn’t require.

Many well-meaning and reputable but overly trusting journalists have allowed themselves to be used as conveyor belts for this DHS propaganda. The result has been a flood of authoritative-seeming news reports, many of them flatly wrong.

The essential facts are as follows:

In order to try to intimidate state governments into allowing their state driver licenses and ID databases to be integrated into a distributed national ID database (the REAL ID Act is about the database, not the ID cards), the DHS is threatening states. DHS intimates that at some future date set at the discretion of the DHS (not earlier than 2018, but that date has already been postponed by a decade since I first wrote about it, and could be postponed again) the TSA and its minions will start preventing people from flying if they show up at airports with ID from states that the DHS, in its discretion, deems insufficiently “compliant” with the federal REAL ID Act.

Hasbrouck goes on to say:

The DHS and the TSA have no legal authority to carry out this threat.

Furthermore, Hasbrouck repeats what he -- and I, and many others -- have been saying for years: flying is a right, not just a privilege. Flying is a right:

The right to travel by air is guaranteed by explicit Federal law (“the public right of freedom of transit through the navigable airspace”, 49 US Code § 40101), by the Bill of Rights (“the right of the people… peaceably to assemble”, U.S. Constitution, Amendment 1), and by an international human rights treaty to which the USA is a party (“Everyone lawfully within the territory of a State [i.a. a country that is a party to the ICCPR] shall, within that territory, have the right to liberty of movement”, ICCPR, Article 12, Paragraph 3).

There's other information in the full column, and I urge you to go over to read it. Hasbrouck ends with this paragraph:

Right now, U.S. domestic travelers don’t need to do anything about their ID cards. However, they do need to tell Congress to repeal the REAL ID Act, and ask state officials to prepare to defend your rights and those of other residents of your state if the DHS and/or TSA try to interfere with Americans' right to travel.

Right to travel. Our right. Get it?

(Thanks to Charlie Leocha and Edward Hasbrouck)
Posted by Lisa Simeone at 11:09 AM

Email ThisBlogThis!Share to TwitterShare to FacebookShare to Pinterest
Labels: Civil liberties, DHS, Hasbrouck, law, security, travel, TSA
Newer Post Older Post Home
"The man who asks of freedom anything other than itself is born to be a slave." -Alexis de Tocqueville