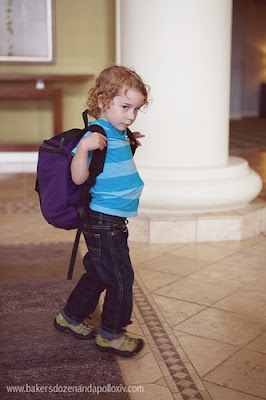 Gee, I'm shocked, shocked, I say! Ya mean the TSA harassed yet another disabled child and made yet another family miss their flight? Never happens!


Renee Bergeron's 3-year-old son Apollo suffers from a heart defect. He is fitted with a permanent feeding tube.

Apollo's parents must feed him through the tube with a special high-calorie formula.

More alarm bells. We also know how the TSA treats formula.
Though Apollo's mother had, like thousands of other mothers before her, dutifully read and adhered to the TSA's supposed instructions on carrying bottles of formula through the checkpoint, the TSA ignored those instructions and put her through the ringer:

“I walked right up to the first agent and told her, ‘My son is tube-fed and this cooler has formula and medical supplies in it,’” Bergeron said, explaining that she had hoped that being direct would be a helpful approach and that it would have prompted a TSA agent to do a thorough search and swab of the items before sending them through to their gate.

Instead, she said, the agent directed her to continue through the line and to put the bag through the X-ray machine, and “didn’t even give a heads-up to the next agent.” That’s when the agent at the machine “freaked out,” Bergeron said, because of the liquid—which was then put through a scan that indicated “explosive residue” had been detected. “Clearly, the things that test for explosive residue don’t work very well,” she said, adding that, at that point, “they surrounded me and began treating me like a suspect—of what I don’t know.”

Again, as we've reported so many times before, the so-called "explosive residue" could be hand lotion, glycerin, cologne, garden fertilizer. It could be anything. Which TSA agents know and, in fact, laugh about all the time.

So what did the TSA agents do to Renee Bergeron? Why, surround her and treat her like a criminal, of course.

Because clearly she was. Is. A criminal.

So are you. So are we all in the eyes of the TSA.

But hey, that's okay. After all, they're just "keeping us safe." Even Renee Bergeron says so:

“Part of me gets it. There are terrorists. We need to keep people safe,” she wrote.

With that attitude, you're practically asking to be abused.

But our story isn't finished. Because Bergeron had fake "explosive residue" on her bottles of Super Scary Terroristy Feeding Formula, she was, naturally, escorted to a private room where the TSA agents could get a good grope.

They were escorted to a restroom then, as Apollo had to go, but Bergeron was not allowed to take him alone. Then the two were ushered to a private room where agents gave Bergeron a thorough pat-down and where a nervous Apollo began to cry and beg his mom to hold him. Bergeron was told she couldn’t touch her son because she could “contaminate” him. “It was horribly traumatic for him,” she said.

Because all of this took so long, the Bergeron family missed their flight.

Oh, well, tough luck. Small price to pay, Ms. Bergeron, so that the millions of clueless and credulous out there can "feel" safe. Because that's what it's all about: not facts, but feelings. Why, the TSA is a veritable therapist's office!

The TSA, of course, came out with its boilerplate response. We've printed it so many times you probably have it memorized:

“We regret that the family did not have a positive screening experience. We strongly encourage passengers with medical conditions to arrive at the checkpoint with ample time for screening. We are committed to maintaining the security of the traveling public and strive to treat all passengers with dignity and respect.”

Well, what do you expect? The TSA is a pack of criminals, starting with the Molester-in-Chief, John Pistole. For three years he has ignored the tens of thousands of complaints and documented stories of abuse caused by his employees and done nothing. Does that sound like someone who cares about "treating all passengers with dignity and respect"?

Oh, and by the way, this isn't the first time the Bergeron family has been abused by the TSA. Chalk it up to "dignity and respect."

(Photo by Renee Bergeron)
Posted by Lisa Simeone at 7:36 AM

Email ThisBlogThis!Share to TwitterShare to FacebookShare to Pinterest
Labels: abuse, airport, assault, crime, John Pistole, security, terror, terrorism, TSA
Newer Post Older Post Home
"The man who asks of freedom anything other than itself is born to be a slave." -Alexis de Tocqueville