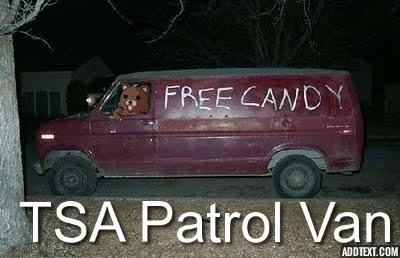 UPDATED BELOW. A TSA agent at LaGuardia Airport in New York has been arrested for sexually assaulting a 22-year-old woman. The only reason he was arrested was because he molested her in a bathroom. If he had followed standard operating procedure, he would've molested her at the checkpoint, where it's usually done.


His name hasn't been released yet; I'll update this post when it is. But as WABC reports:

According to authorities, the suspect was arrested following an investigation of claims by the 22-year-old victim, a college student from Korea.
The victim was in Terminal B at around 8 p.m. Tuesday when she was told by the suspect to go into the bathroom for a search.
Once there, the agent molested her, said police.

Of course, we already know what the TSA's response will be: "He didn't follow proper procedures, we hold our employees to the highest standard," blah blah blah blahfuckingblah.

Never mind that this kind of stuff has been going on for years. Never mind that an entire ring of TSA assailants was operating at National Airport in Washington, D.C. as far back as 2004. Never mind that just recently, TSA agents in Denver were found to be sexually assaulting men.

As I've said so many times in the past, if you think this is the only place where this is going on, I have a bridge to sell you.

Email ThisBlogThis!Share to TwitterShare to FacebookShare to Pinterest
Labels: abuse, airport, assault, New York, security, sexual assault, travel, TSA
Newer Post Older Post Home
"The man who asks of freedom anything other than itself is born to be a slave." -Alexis de Tocqueville