Belgium attacks: more proof that the TSA is useless 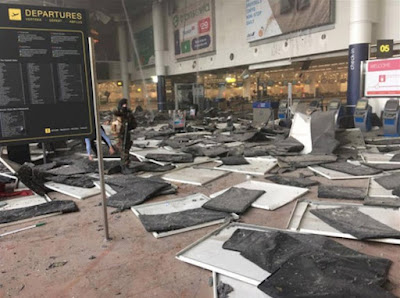 The bomb attacks in Belgium today -- three of them, two at different locations in the airport and one in the subway -- present in high relief yet more proof  of what some us have been pointing out for years: the TSA is a charade. The TSA does not and cannot and will never prevent terror attacks. All the pre-boarding bullying, harassing, scanning, and groping doesn't make a damn bit of difference, because -- duh -- people can set off bombs anywhere, not just on a plane.


From the Tribune wire reports:

Witnesses told The Associated Press that one occurred at an excess baggage payment counter and the other near a Starbucks cafe.

Hello?? Excess baggage payment counter. Starbucks cafe. In the airport. Not on a plane.

And the subway explosions happened in, er, the subway. Not on a plane.

Even the most credulous, unthinking TSA apologists can see those facts. I don't believe it'll make any difference -- in fact, I know it won't. But at least the rest of us can see what's right in front of our faces even if they refuse to.

The TSA isn't protecting you from anything. If you think it is, the kindest thing I can say about you is that you're deluded. Willfully deluded. But I've been at this long enough to know that denial is one of humankind's most cherished behaviors.

(Photo: Jef Versele via Yahoo News)
Posted by Lisa Simeone at 10:16 AM

Email ThisBlogThis!Share to TwitterShare to FacebookShare to Pinterest
Labels: airport, attack, Belgium, bomb, security, subway, terror, terrorism, travel, TSA
Newer Post Older Post Home
"The man who asks of freedom anything other than itself is born to be a slave." -Alexis de Tocqueville