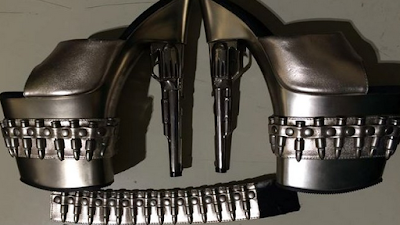 In the never-ending saga of TSA theft and stupidity — and did I say theft? — we have the latest episode (that we know of): at Baltimore-Washington International Airport, the goons spied yet another tasty treat they wanted to sample. So they pretended that said items were dangerous and confiscated them — er, sorry, encouraged the passenger to give them up. (As we know, since they tell us all the time, especially at their main propaganda organ, they don’t confiscate anything.) From the story in the Baltimore Sun:


The shoes, which had stiletto heels in the shape of handgun barrels and also featured what looked like bullets, were in the woman’s carry-on luggage, TSA spokeswoman Lisa Farbstein said.

Readers of this blog will recall that in 2013 the TSA also stole a pair of Chanel shoes, a two-inch toy gun belonging to a sock monkey, and in 2014 several bottles of Jimmy Choo perfume.
These scary terroristy things could’ve harmed you and your fellow travelers! Aren’t you glad the TSA is Keeping You Safe?!
Regular readers will also recognize the name of Lisa Farbstein as yet another of the TSA’s many lying flacks.

“We want to remind travelers that they should not bring replica guns or ammunition to checkpoints,” Farbstein said in an email. “It will definitely slow them down, slow down their traveling companions who are waiting for them, and it will slow down the checkpoint lines for other travelers.”

Way to blame it on the passengers, Farbstein.

Here’s the comment I left at the Baltimore Sun article. Go on over and give it some love, and add comments of your own, before they remove it:

This agency is full of molesters and morons. (Let’s see how long this comment is allowed to stand.) Everyone who defends this criminal agency deserves what he gets, and, paraphrasing Mencken, I hope he gets it good and hard.
They wanted to steal her shoes and bracelet; that’s why they stopped her. And if you don’t know the TSA steals from travelers all the time, you have your head somewhere other than where it should be. The TSA confiscated a 2-inch toy gun from a sock monkey:http://tsanewsblog.com/12236/news/tsa-seizes-terroristy-sock-monkey-confiscates-gun/
And they stole another women’s shoes, again because they wanted them:http://tsanewsblog.com/11216/news/tsa-outdoing-its-own-stupidity-at-every-turn/
They’ve also stolen several perfume bottles because they were supposedly shaped like — gasp! — a grenade. But yeah, it’s all for your safety. And to fight The Terrorists who are Hiding Around Every Corner!


(Photo courtesy of your tax dollars)

UPDATE ALREADY: Not 10 minutes after I wrote it, the Sun censored my comment.

Email ThisBlogThis!Share to TwitterShare to FacebookShare to Pinterest
Labels: abuse, crime, guns, perfume, shoes, stupidity, terroristiness, theft, TSA
Newer Post Older Post Home
"The man who asks of freedom anything other than itself is born to be a slave." -Alexis de Tocqueville