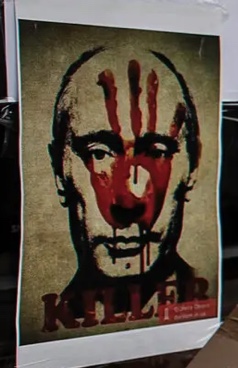 Only three of the many comments I've been making at leftwing sites that are defending Putin and blaming NATO. Not that it matters. They're all nuts. I am so infuriated I could spit:

To think that I trashed my career to be involved with these people -- former friends and former activists-in-arms with whom I participated in Occupy in 2011 -- and now they're as batshit-insane as any of the MAGA maniacs on the right.

Putin is a thug. Putin is a dictator. Putin is murdering Ukrainians. But that's ok, apparently, for these supposed leftists and supposed peaceniks, because anything and everything that goes against the US is okay. Now they're kissing Putin's ass.

Jesusfkngchrist, I am so ashamed I ever got involved with these people. They have lost their ever-loving minds.

Thank you, Ehrlichman. The excuses and apologies being made by the left — ostensible left — for Russia’s criminal invasion are appalling. These people would’ve been cheering Stalin if they’d been around then.

I used to be an activist-in-arms with some of these people, including Chris Hedges, back during Occupy. Since then, I’ve watched as they’ve turned batshit-insane on so many fronts. They are incapable of seeing nuance, complexity, difficulty, contradiction. They are as bad in their binary thinking as any of the MAGAloons on the right.

Their entire philosophy consists of one thing and one thing only: “US wrong. Anyone who opposes the US right. Always.”

Disgusting, sociopathic, bordering-on-criminal defense of Putin. What is wrong with you people??

Was Putin also “forced” to flatten Grozny?? Was that all NATO’s fault, too??

You people make me want to vomit. I hang my head in shame as a leftist to be associated with such vile apologists.

Email ThisBlogThis!Share to TwitterShare to FacebookShare to Pinterest
Labels: leftwing lunatics, lying, propaganda, Putin, Russia, Ukraine, war, war crimes, war criminal
Older Post Home
"The man who asks of freedom anything other than itself is born to be a slave." -Alexis de Tocqueville