UK tries to put the screws to Glenn Greenwald 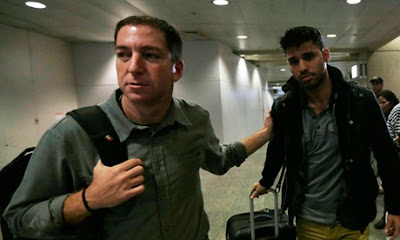 Just in case you didn't already know the authorities own you, they're going to make sure you do:


The 28-year-old was held for the maximum amount of time the law allows for questioning at airports, ports, and border areas before a formal arrest has to take place. Miranda was detained at 8:05 a.m. Sunday and released at 5 p.m., according to a Scotland Yard statement.

Miranda was eventually released without charge, but electronics, including his cell phone, laptop, memory sticks, and “various video game consoles” were confiscated. Greenwald’s Brazilian partner had been in Berlin visiting Laura Poitras, the filmmaker who has also been working with the Snowden leaks.

This is obviously a rather profound escalation of their attacks on the news-gathering process and journalism. It's bad enough to prosecute and imprison sources. It's worse still to imprison journalists who report the truth. But to start detaining the family members and loved ones of journalists is simply despotic. Even the Mafia had ethical rules against targeting the family members of people they feel threatened by. But the UK puppets and their owners in the US national security state obviously are unconstrained by even those minimal scruples.

If the UK and US governments believe that tactics like this are going to deter or intimidate us in any way from continuing to report aggressively on what these documents reveal, they are beyond deluded. If anything, it will have only the opposite effect: to embolden us even further.

Some of us have been warning for years -- years -- that since 9/11, the designation of "terrorist" is slowly creeping to encompass anyone and everyone the state wants it to encompass. And we've been laughed at and told we're being "hysterical" and "hyperbolic." As usual, the United Sheeple of America -- and of the UK -- continue to snuffle along, their snouts stuffed into the grass.

(Photo by Ricardo Moraes/Reuters, courtesy of the Guardian)
Posted by Lisa Simeone at 8:05 PM