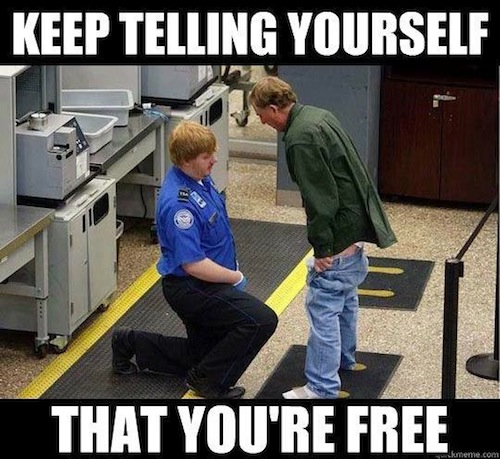 Almost every day I receive emails from people telling me about their TSA experiences. They often wonder if they could have prevented the abuse meted out to them by dressing differently, talking differently, acting differently, flying out of a different airport, you name it. As I always tell them, no. You have no power over how the TSA treats you. The TSA has absolute power. Whether a TSA agent woke up on the wrong side of the bed one morning or is simply being sadistic, it has nothing to do with you. It has everything to do with them.


Yesterday I received an email from a man who, with his 17-year-old son, was harassed in Buffalo. He thought it had something to do with the location, since he said he hadn't been bothered in Reno. Again, no. He just happened to be the victim of TSA whim, which rules everything when you fly. Don't look for logic, I told him; there is none. There isn't meant to be.

What the TSA did to him and his son -- which, I might add, was illegal, but as I've written hundreds of times, the TSA does illegal stuff all the time -- what the TSA did was to compel obedience. It was power for the sake of exercising power. It was to put him in his place, to show him who's in charge. And as long as people keep choosing to fly, they are putting themselves at the mercy of this power. They are tacitly agreeing that the TSA should be in charge.

Here is his email to me, in its entirety, with slight editing for punctuation:

I don't fly much -- I really have developed an aversion to flying.

I recently flew Southwest from Reno to Buffalo. TSA in Reno was fine -- smiling, cordial, friendly.

My return from Buffalo, I found TSA to be the opposite -- rude, unprofessional, bullying. I was fuming. I went through with my 17-year-old son. We had to go through a full-body imaging system. I have no objection.

Son gets pulled aside. I go through and wait for my carry-on to get scanned. Lots of TSA people milling about, yet it wasn't that busy. TSA dude handling my carry-on asks if I'm with someone, and I tell him I'm with the young guy in the brown t-shirt (point toward him). TSA dude says they're sending my carry-on back through scanner again. OK. Lots of confusion and TSA people bumping into each other. Someone comes back with my carry-on stuff -- changed their mind about sending it through scanner, I guess. Then one of them says to me in a not very professional tone: "Why didn't you tell us you were with someone ?" I suppose my tone in response was not what I'd characterize as submissive: "I did. I told you that I was with the kid in the brown shirt over there.” I'm confused. The TSA dude is holding my tray of carry-on and on top are two pairs of shoes. DUH!

So they carry my tray of carry-on over to a table I'm standing and someone with a metal detector goes through my stuff. Fine, no problem. Meanwhile, they take my kid to an open area and do a full-body pat-down. When this is finished my son comes back to where I'm standing in front of a table with my carry-on stuff in the tray. A second group of two TSA people come over and start again to rifle through my carry-on stuff.

The TSA agent starts asking my son questions:  what's your business in Buffalo, what did you do here, who did you see here, and she keeps drilling down to information that is clearly none of her business. How many cousins do you have, etc. It's clearly some sort of behavioral testing. She asks me for my ID. It's in the tray with the rest of my carry-on stuff. I offer to pull it out for her, but she waves me away saying she's going to do it herself.

She then proceeds to take out my money clip and goes through one by one every item, dollar, and card in my money clip -- finds my driver’s license and then asks me if I'm the name on my driver’s license. They leave my carry-on stuff a mess in this tray that looks like it's NEVER been cleaned -- the bottom of it is filthy. That ends the interrogation and they just walk away. By then I'm steaming fucking mad as hell at our treatment and their unprofessional behavior. I don't mind going through a serious, professional security check, but I DO mind being bullied, abused, and feeling like they aren't doing a professional job but doing a half-assed job.

I suppose I volunteered to get extra special treatment because I wasn't a submissive sheep in response to unnecessarily getting yelled at.

Well, just sharing my story and obviously venting. I don't know if rudeness even qualifies as a TSA complaint, and I suspect that by complaining I'd probably get on some sort of suspect list. Really felt like I was in Stalin Russia or Hitler Germany!

As I told him, no, there's no website where you can research the quality of TSA professionalism [sic] by airport. And even if there were, it would be meaningless. It's not about professionalism. It's about obedience training. They messed with him because they can. "Rude" is a wholly inadequate word for what they did to him and his son.

The TSA has no right to go through people's money, wallets, personal documents. This, too, has been proven. But they do it anyway, over and over and over again.

Oh, and of course he can complain to his heart's content; nothing will come of it. Neither will he be put on a "suspect list." The TSA would like you believe they maintain such a list, but they don't. They don't have their shit together enough for that. They're busy confiscating shampoo, water bottles, and mashed potatoes; how can they possibly spend time maintaining a list of people on whom they want to get revenge?

Besides, any victim will do. Whether they're pissed off at you in particular, at a passenger from last week, or just at the world in general, if you drift into their crosshairs, tough luck. They'll get their jollies one way or another.

Email ThisBlogThis!Share to TwitterShare to FacebookShare to Pinterest
Labels: abuse, airport, crime, harassment, security, travel, TSA
Newer Post Older Post Home
"The man who asks of freedom anything other than itself is born to be a slave." -Alexis de Tocqueville