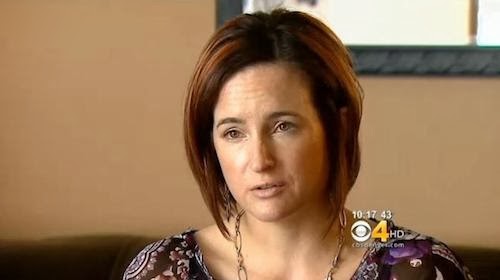 Finally! Someone in law enforcement is taking seriously the charge of sexual assault by TSA workers.
Jamelyn Steenhoek, 39, was accompanying her 13-year-old daughter to the gate for the daughter’s flight. Steenhoek “alarmed” when she went through the metal detector. Then her hands were swabbed and they “alarmed.”
Again we repeat: glycerin, hand lotion, garden fertilizer, gasoline — all cause false alarms. It happens all the time, and the TSA knows it happens all the time.


Then Steenhoek (no fault of hers) made the biggest mistake: going alone into a private room with a screener.
Never, ever, let them take you into a private room. The opportunity for abuse is obvious.
What happened next indicates that a TSA clerk wanted to get her jollies:

“At that point she did a pretty invasive search. They are just areas of the body I’m not comfortable being touched in. On the outside of my pants she cupped my crotch. I was uncomfortable with that.”
Steenhoek said the agent repeatedly dug her fingers into Steenhoek’s armpits.
“The part of the search that bothered most was the breast search. You could tell it shouldn’t take that much groping. To me it was as extensive as an exam from my physician — full touching and grabbing in the front.I felt uncomfortable, I felt violated.”
She said when the search turned up nothing, the agent repeated it a second time.

“So it didn’t make any sense. The whole search was done over and more touching and grabbing than the first time.”


You see, it’s not just CBP (Customs and Border Protection) that gets off on sexually molesting travelers.
To her credit, Steenhoek went to the Denver police and filed a complaint. And, wonder of wonders, the police actually took her seriously.

“I was looking for consequences, for TSA to be accountable for what they do to people,” Steenhoek told CBS4.
“You want one or more of them to be charged with sexual assault?” she was asked.
“I do,” she responded.
Jackson says the sex assault complaint is being handled like any other.
“We’ll present it to the district attorney and see if there’s enough to charge,” Jackson said.

Look, I’m not holding my breath. The TSA gets away with abuse, sexual and otherwise, on a daily basis. I doubt Steenhoek will get satisfaction. Yukari Miyame, Andrea Abbott, Carol Jean Price, Jon Corbett, Stacey Armato, and so many others haven’t. But at least she’s trying. And at least someone in authority is finally paying attention. (A California District Attorney, Steve Wagstaffe, also promised back in 2010 to charge TSA screeners with sexual assault if he had to; but so far, nothing’s happened there.)
Brava, Jamelyn Steenhoek! And if you need help with your legal expenses, there are many of us out here who would be glad to contribute, just as we did for others who’ve taken on this criminal agency.
(Photo courtesy of CBS Denver)
Cross-posted at TSA News.

UPDATE: The Denver CBS Local article that reported this (link above) was flooded with comments. The site uses Disqus, and there were hundreds of comments there. Many TSA News readers left some of them. Now they’re all gone. Wonder where they went? Maybe that’s SSI.
Posted by Lisa Simeone at 6:58 AM

Email ThisBlogThis!Share to TwitterShare to FacebookShare to Pinterest
Labels: abuse, airport, assault, crime, Denver, security, sexual assault, travel, TSA
Newer Post Older Post Home
"The man who asks of freedom anything other than itself is born to be a slave." -Alexis de Tocqueville