Eternal War, or Reason #167 Why Obama is the Second Coming of George W. Bush 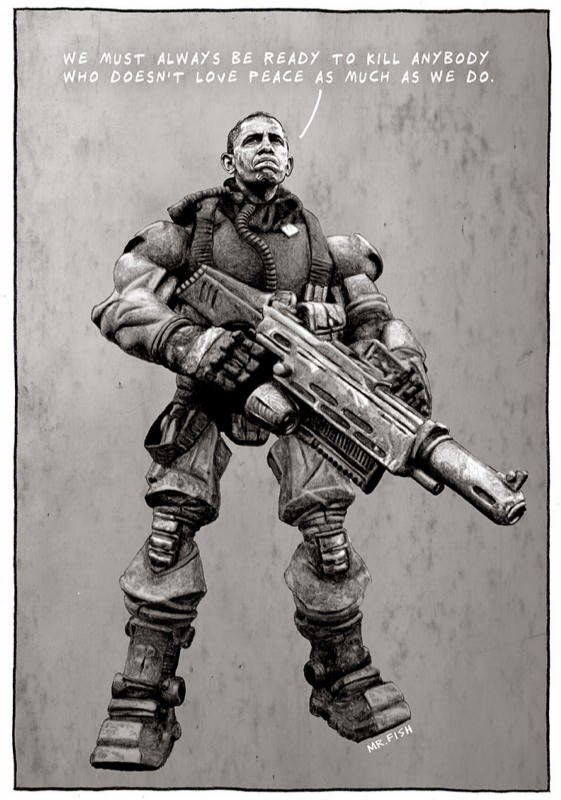 Well, as predicted, Obama is once again striving to prove he's just as clueless, blinkered, and warmongering as his predecessor. It's hard to tell anymore who in the stupidity sweepstakes is winning.


Actually, I take that back. Dubya was undoubtedly more stupid; Obama is more frightening because he's not stupid. He hides his brutality under a veneer of intelligence and charisma. And, of course, he has a "D" behind his name, which means everything he does is okay according to his followers, just as the "R" behind Dubya's name meant everything he did was okay to his followers.

Ah, yes, we've said it so many times it's a cliché -- two sides of the same coin. But shhh -- don't tell that to the Obamabots. No, no, it wouldn't do to interrupt their reverie with those dirty things called facts. (And anyway, as we know, facts don't matter. Again, they don't matter.)

Fact such as their guy is bombing and murdering every bit as much as his predecessor -- in fact, more. His drone campaign, his allowing torture to continue at Guantanamo, his championing of the NDAA, his crackdown on the Occupy movement, his support for total surveillance, his persecution of whistleblowers, his encouraging of citizens to spy on citizens, his evisceration of civil liberties, his plundering of the economy, his hand-outs to war profiteers, his blind support of Israel, his fearmongering, his newfangled parroting of Bush's "We gotta fight 'em over there so we don't have to fight 'em over here!"

Really, how do you people look at yourselves in the mirror, when you're supporting precisely the same murderous policies for which you excoriated Bush? Even when your Fearless Leader has bragged outright he's "really good at killing people"?? (And let's not let the worthless wankers in Congress off the hook, seeing as how both parties are happy to abdicate responsibility yet again, panting along after Obama like dogs slavering after red meat.)

Can you imagine if we had someone like FDR at the helm, someone who said, "We have nothing to fear but fear itself," instead of "Be afraid, be very afraid!"

This relentless drumbeat of "Terrorism! Terrorists! Terrorists Everywhere!" It would be merely embarrassing if it weren't so deadly serious. Grown men and women urging us all to look behind every corner, to expect death at any moment, and, of course, to bomb bomb bomb, because that's the answer to everything.

Never mind that the U.S. helped create ISIS, just as it helped create Al Qaeda. (Oh, Al Qaeda, you say, what's that? So quaint. We don't need Al Qaeda anymore, we have a new enemy now. Just as Göring said, doesn't matter who the enemy is, as long as you have one. The people can always be made to go along.)

Let's support these "terrorists" because they're our "terrorists." Only they're not terrorists now, they'll only be terrorists after we're done with them and they start doing things we don't like. Then they'll go from being "freedom fighters" to "terrorists." It's the American way!

And then when our chickens come home to roost, as they will, as they have been doing for decades, we can throw up our hands and wail, "Why, oh why do they hate us?!"
Posted by Lisa Simeone at 7:55 AM