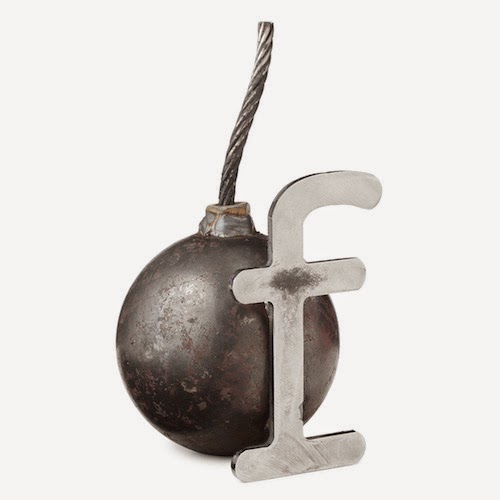 As I say so often here at TSA News, you can’t make this stuff up.


Our crusaders in blue have once again saved us from certain destruction. Ever vigilant, intellectually adept, and multi-talented (seeing as how they can spot stuff to steal even as they have their hands down your pants), they discovered the above pictured Big Scary Terroristy Thing at Mitchell Airport in Milwaukee.
It is an “F Bomb Paperweight,” a piece of art handmade by Fred Conlon and selling for $45. Quoting from the F Bomb’s blurb:

It’s never easy dropping truth bombs in the office. But “f” bombs? Always explosive fun! Fred Conlon’s recycled steel sculpture lightens up desk-side chats and tough conversations with a delightfully abstract expletive appropriate for any situation. Handmade in Utah.
Each is one-of-a-kind and will vary slightly.

And so you can see how nefarious this Fred Conlon character is, and, therefore, anybody who buys anything from him is:

Raised in Colorado, Fred Conlon lives now in Salt Lake City, Utah, where he makes garden sculptures out of recovered objects. For his helmet sculptures, he uses real recovered World War II helmets. “It is very satisfying to transform something once used in war into a peaceful garden decoration,” he says. His work has been featured in Niche Magazine, the Salt Lake Tribune and HGTV. What would he be if he weren’t an artist? “Happy…just kidding!” he answers. “I can’t imagine doing anything else.”
Click here to view a video of how Fred Conlon creates his art!

Ah, but Fred, Fred, Fred — you can’t be too careful these days. After all, The Terrorists Are Everywhere™! How do I know this? Why, the TSA Blog tells me so. In its weekly Show and Tell, where TSA Bloggers brag about all the items they’ve confiscated from people, the F Bomb is on display. It is described as “a black novelty bomb."
Not just a regular bomb, mind you, but anovelty bomb! Oh, the horror!
The TSA explains:

When these items are found at a checkpoint or in checked baggage, they can cause significant delays because the explosives detection professionals must resolve the alarm to determine the level of threat. Even if they are novelty items, you cannot bring them on a plane.

Yes, the “explosives detection professionals” must be called in to “determine the level of threat.” In this case, from a paperweight that’s 4 inches high and 2 inches in diameter and weighs 18 ounces.
But look — it has that special “f” attached — you know, the one that looks like a Facebook “f”. Why, what evil plot is on display here? Could this be some kind of secret signal? Is Facebook, with its global reach, in on some scheme to spread fear and Terror™ at airports everywhere? Is this a Trial Run™? Why, if the TSA stops confiscating F Bomb Paperweights, thinking they’re benign, then someday somebody could come in with a real bomb (that looks like something out of a cartoon) and before you know it, boom!
I get chills just thinking about it. Thank god the TSA is here to save us all.
And just think — maybe whoever stole the F Bomb can trade it for the “grenade-shaped” perfume bottle, or maybe the “knuckle-clasp” purse, or perhaps just theembossed purse, or the toy lighter, or the shoes, or any number of other things.
All that terroristy stuff would make for quite a nice collection. TSA agents are nothing if not connoisseurs.
(Photo: uncommon goods)
Posted by Lisa Simeone at 7:13 AM