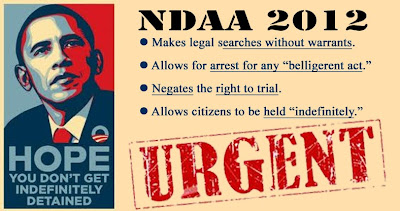 The rights-busting juggernaut that is the NDAA just keeps rolling along. Thanks to the worthless wankers in Congress and an imperial president who clearly studied GWBush 101, we have a law on the books that allows the detention of American citizens, without trial, without access to a lawyer, in secret, in military prisons, or anywhere else the authorities decide to put them.

As I wrote in July, Chris Hedges, Noam Chomsky, Daniel Ellsberg, et. al. have been fighting the NDAA and trying to get the courts to recognize that it subverts the Constitution and the entire rule of law. They won a battle, then lost a battle, and now are trying to get their case heard at the Supreme Court.

What are the chances?

What are the chances?

God help us if you still don't know what the NDAA is, but just in case, here's a primer:

If Section 1021 stands it will mean that more than 150 years of case law in which the Supreme Court repeatedly held the military has no jurisdiction over civilians will be abolished. It will mean citizens who are charged by the government with “substantially supporting” al-Qaida, the Taliban, or the nebulous category of “associated forces” will be lawfully subject to extraordinary rendition. It will mean citizens seized by the military will languish in military jails indefinitely, or in the language of Section 1021 until “the end of hostilities”—in an age of permanent war, for the rest of their lives. It will mean, in short, obliteration of our last remaining legal protections, especially now that we have lost the right to privacy, and the ascent of a crude, militarized state that serves the leviathan of corporate totalitarianism. It will mean, as Forrest pointed out in her 112-page opinion, that whole categories of Americans—and here you can assume dissidents and activists—will be subject to seizure by the military and indefinite and secret detention.

“As Justice [Robert] Jackson said in his dissent in the Korematsu case, involving the indiscriminate detention of Japanese-American citizens during World War II, once an unconstitutional military power is sanctioned by the courts it ‘lies about like a loaded weapon, ready for the hand of any authority,’ ” Mayer said.

. . . This will be the standard tactic. Laws passed in the so-called war on terror will be used to turn all dissidents and activists into terrorism suspects, subjecting them to draconian forms of state repression and control. The same tactic was used during the anti-communist hysteria of the 20th century to destroy union leaders, writers, civil rights activists, intellectuals, artists, teachers, politicians, and organizations that challenged entrenched corporate power.

Think this won't happen? It already has. Read the column. Oh, and when you get to the part about the big scary terroristy October 2011 Movement, you should know that I was a part of that movement. And we all know how big and scary and terroristy I am. Clearly I should be indefinitely detained for the good of the country.
Posted by Lisa Simeone at 8:57 AM

Email ThisBlogThis!Share to TwitterShare to FacebookShare to Pinterest
Labels: Civil liberties, crime, empire, fascism, NDAA, police state, terror, terrorism
Newer Post Older Post Home
"The man who asks of freedom anything other than itself is born to be a slave." -Alexis de Tocqueville