Supreme Court Wipes Its Ass with the Constitution -- Again 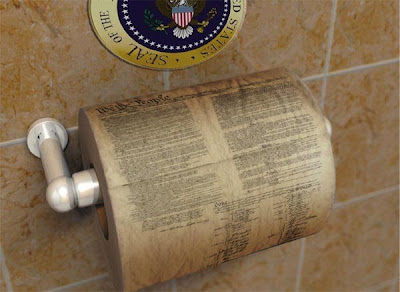 I'd like to say this story is unbelievable, but alas, it's all too believable. We barely have a Bill of Rights anymore, so what's one more amendment down the crapper?

This just popped into my mailbox:

Think the end of DOMA or the Voting Rights Act will change the US? The Supreme Court just handed down a decision that rewrites the Constitution, claiming we have no Fifth Amendment protection unless we explicitly call for it.
Remaining silent no longer protects you from self-incrimination. In order to have your Constitutional rights asserted, you actually have to say, out loud, "I'm invoking my right to remain silent" — even if no Miranda rights have been read or arrests made.
This ruling implies the Fifth Amendment is not a right but a privilege, and one for the well-educated and best-informed at that.
We call on Congress to pass legislation overruling this as much as possible and requiring law enforcement to inform both witnesses and suspects of these maladjusted rights.

PETITION TO CONGRESS: We are appalled by the recent SCOTUS decision to gut the Fifth Amendment. We call on our lawmakers to pass legislation to re-establish our right to remain silent and require law enforcement to spread word of this awful change in the meantime.

This country sinks further into tyranny every day. The sheeple, with their snouts stuffed into the grass, can't be bothered to lift their heads. But then, I'm just a doomsayer and don't know what I'm talking about.
Posted by Lisa Simeone at 9:55 AM

Email ThisBlogThis!Share to TwitterShare to FacebookShare to Pinterest
Labels: 5th Amendment, bill of rights, Civil liberties, Constitution, empire, fascism, sheeple, Supreme Court
Newer Post Older Post Home
"The man who asks of freedom anything other than itself is born to be a slave." -Alexis de Tocqueville