My, my, isn't this a charming family photo: 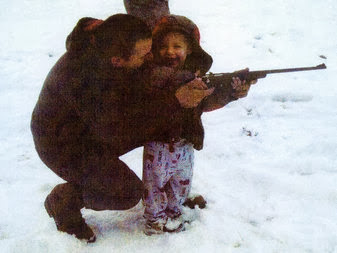 But of course. Those famous American "family values" in action!

This picture (and yes, this child is now dead, accidentally shot himself; father convicted of negligent homicide) is from a story in today's NYT by Michael Luo and Mike McIntire called Children and Guns: The Hidden Toll. A few nuggets:

A New York Times review of hundreds of child firearm deaths found that accidental shootings occurred roughly twice as often as the records indicate, because of idiosyncrasies in how such deaths are classified by the authorities. The killings of Lucas, Cassie, and Alex, for instance, were not recorded as accidents. Nor were more than half of the 259 accidental firearm deaths of children under age 15 identified by The Times in eight states where records were available.

As a result, scores of accidental killings are not reflected in the official statistics that have framed the debate over how to protect children from guns.

The National Rifle Association cited the lower official numbers this year in a fact sheet opposing “safe storage” laws, saying children were more likely to be killed by falls, poisoning or environmental factors — an incorrect assertion if the actual number of accidental firearm deaths is significantly higher.

In all, fewer than 20 states have enacted laws to hold adults criminally liable if they fail to store guns safely, enabling children to access them.

That's right, over half the states in the union don't give a shit that an adult is irresponsible around guns or children. Oh, and the NRA is juking the stats. Gee, I'm shocked, shocked, I say!

Here's another tidbit I'm sure y'all will find shocking:


A common theme in the cases examined by The Times, in fact, was the almost magnetic attraction of firearms among boys. In all but a handful of instances, the shooter was male. Boys also accounted for more than 80 percent of the victims.

Time and again, boys could not resist handling a gun, disregarding repeated warnings by adults and, sometimes, their own sense that they were doing something wrong.

Gee, testosterone has an unholy effect on males and is responsible for so much mayhem in the world? Again, shocked!

Forgive my sarcastic tone on such a serious subject, but I get so tired of hearing people deny the obvious, and gun fanatics deny it all the time. (They're not the only ones living in denial, of course; it's just that this particular post is about guns and gun violence. I've written plenty of other posts pointing out the lure of denial for people all over the political spectrum on all kinds of subjects.)

What happened at the Navy Yard in Washington, D.C., just a few weeks ago, when a mentally ill, heavily armed man gunned down over a dozen victims? Where were all the Happy Heroes with their conceal-and-carry to save the day? After all, that's always -- always -- what the NRA and its adherents are telling us -- that if more people were armed, we'd have less bloodshed.

Never mind the illogic -- not to mention insanity -- of this line of, er, argument. It's not about logic.

One of my other favorite claims by the gun fetishists is that when "The Government" comes to get them, they'll be able to defend themselves.

You're going to defend yourself with a pistol or a rifle or whatever you please against a government that has -- and isn't afraid to use on its citizens -- grotesquely militarized police, bombs, LRAD, "active denial" heat wave (feel like being fried?), and a whole host of other weapons that sound like they're out of sci-fi but that can cut you in two? That's why you want your precious guns?

Dream on, eroticizers of the barrel, dream on.
Posted by Lisa Simeone at 10:31 AM

Email ThisBlogThis!Share to TwitterShare to FacebookShare to Pinterest
Labels: American values, Congress, guns, NRA, violence
Newer Post Older Post Home
"The man who asks of freedom anything other than itself is born to be a slave." -Alexis de Tocqueville