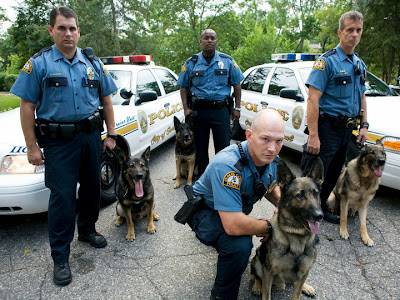 So that means there are more. Logic dictates that there have to be more.

As I wrote this morning, David Eckert is suing the police in Deming, New Mexico, because they forced him to undergo multiple -- 8 -- cavity searches, not only fingers probing his rectum, but also forced enemas and even forced sedation and a forced colonoscopy.

Since this story broke, another man in New Mexico has come forward reporting that he was also forced to undergo similar invasive searches, also for a similar trivial traffic infraction -- failing to use his turn signal.

I would like to know what all the know-it-alls and supposedly informed people, especially journalists, out there are saying now? The same people who have been scoffing, for years, at the evidence of increasing police brutality and authoritarianism in this country. What do you say now, geniuses?

Logic -- you may have heard of it -- logic dictates that there are more people out there to whom this happened. It's not rational to believe that this abuse has happened to only 2 men in the U.S. And again, as we already know, forced blood draws and forced catheterizations are going on all over the country.

I neglected to say in my earlier post what I want to say now: I hope these men sue the shit out of these police departments. I hope they drag them through the mud.

Problem is, it's the taxpayers who will be on the hook. As always.

Police departments and the cities that oversee them have fat insurance policies that cover this stuff. Unless those cops are individually, personally, held liable for their brutality, unless they personally feel the pain of a financial penalty, nothing will change. They'll continue to get away with ever more abusive practices, most of which we can trace the the so-called "war on drugs" and which are now, predictably, being employed in the so-called "war on terror."

Forcing people to undergo humiliating, degrading procedures is about control. Power and control. Nothing else.

It's worth noting that in all these cases, physicians are complicit in this abuse. Medical doctors are performing these "searches." And as the second linked article makes clear, cops brought their victims to specific doctors who they knew would go along with the abusive practices.

Oh, but we're not supposed to go there. Godwin! Godwin! Can't call a spade a spade!

Final observation: many of these incidents involve dogs. Trained drug-sniffing dogs. I'm tired of hearing people tout dogs as a panacea. As all dog trainers will tell you, dogs, no matter how experienced, no matter how well trained, are not infallible. Far from it. Dogs respond to their handlers' cues. Dogs can be induced to "find" whatever their handlers want them to find. Quit touting dogs as the answer to everything from drug interdiction to immigrant smuggling to you-name-it.

And quit assuming the police are always right. Quit bowing down to every authority figure who comes down the pike. We all have to make a decision as to how we're going to live in this world -- as free human beings, or as worms. If you believe everything the powers-that-be tell you, we know where you stand. Or more accurately, crawl.
Posted by Lisa Simeone at 8:31 PM