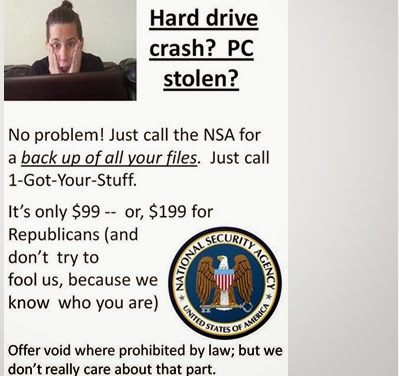 Really, you can't make this shit up. Every day, actual news in the U.S. reads like something from The Onion. Only it's not from The Onion; it's real. And it's now become typical. Typical police-state stuff. (Oops -- there I go again, using the dreaded "p" word!)

From The Judicial Watch Blog:

The feds have threatened to criminally prosecute a novelty store owner who sells products—such as “Department of Homeland Stupidity” coffee mugs—making fun of the U.S. government. Could this be a matter of national security, or that Uncle Sam simply lacks a sense of humor?

To poke fun at the National Security Administration (NSA) the merchant, Dan McCall, sells T-shirts with the agency’s official seal that read: “The NSA: The only part of government that actually listens.” Other parodies say “spying on you since 1952” and “peeping while you’re sleeping.” The designs may seem funny—and possibly represent reality—but to the government it’s no laughing matter. In fact, it’s a serious issue worthy of an investigation and legal action.

The NSA and the Department of Homeland Security (DHS) quickly fired off “cease and desist” letters to the website that sold the products, threatening litigation and criminal prosecution if the parody designs weren’t immediately removed. The agencies claim the parody images violate laws against the misuse, mutilation, alteration, or impersonation of government seals. The intimidating communication scared the website enough to remove the items, but McCall isn’t going down without a fight.

Good for McCall for fighting back on First Amendment grounds. I'm sorry he has to spend money, though. Lawsuits are expensive, time-consuming, and soul-sucking. I hope not only that he wins, but that Uncle Sam has to foot the bill.

McCall's business is called Liberty Maniacs. You might want to toss him a few bucks. Oh, and I'm proud that a Baltimore law firm is helping him. McCall writes:


"Paul Allen Levy, Public Citizen, and Ezra Gollogly of the Baltimore firm Kramon & Graham have done absolutely heroic work in my aid pro bono, but the many dimensions of this fight, and incidental legal expenses that have, and will occur make every single dollar count for a mom and pop operation like mine."

Email ThisBlogThis!Share to TwitterShare to FacebookShare to Pinterest
Labels: bullshit, Civil liberties, DHS, empire, fascism, NSA, police state, speech, stupidity, surveillance, The Onion
Newer Post Older Post Home
"The man who asks of freedom anything other than itself is born to be a slave." -Alexis de Tocqueville