TSA: clinging to “front lines” instead of frontal cortex 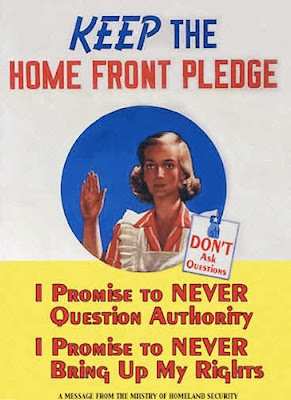 We are living in a dystopian novel.

From fearmongering statements by government officials about "the front lines" (claims that can only be called insane) to hysterical overreaction by the general public every time they hear a loud sound (it's a wonder innocent people weren't shot by trigger-happy cops), Americans are wallowing in fear. And yes, it's self-induced.
Of course fear is a primal instinct. We get it. But it's also a conditioned response. That response can be strengthened or weakened by behaviors:

One of the most interesting things about studying fear is looking at the social constructions of fear, and learned fears versus those fears that appear to be more innate, or even genetic. When we look across time and across the world, we find that people truly can become afraid of anything. Through fear conditioning (connecting a neutral stimulus with a negative consequence) we can link pretty much anything to a fear response.

That's why we at TSA News have been hammering home, for over two years now, empirical evidence, risk assessment, statistical analysis, facts, facts, facts. That's why we've provided hundreds of examples of TSA conditioning. Conditioning to get people to Be Afraid Be Very Afraid, All The Time, in order to compel obedience.

A fearful populace is easier to control than a rational one.

A fearful populace doesn't ask "Why?"

And a fearful populace enslaves itself.

We don't need actual threats of actual people or actual events to terrorize us. We've done it to ourselves.
Posted by Lisa Simeone at 11:01 AM

Email ThisBlogThis!Share to TwitterShare to FacebookShare to Pinterest
Labels: airport, fear, security, stupidity, terror, terrorism, travel, TSA
Newer Post Older Post Home
"The man who asks of freedom anything other than itself is born to be a slave." -Alexis de Tocqueville