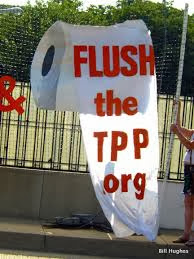 This is huge. Huge.

I've been writing and talking about the TPP -- Trans-Pacific Partnership -- for over a year now, also participating in protest demonstrations against it. The TPP is, to use the words of activists Kevin Zeese and Margaret Flowers, "NAFTA on steroids."

It's a so-called "free trade" pact that is, in fact and not hyperbole, a corporate coup. The TPP would give transnational corporations sovereignty over governments.

No, I am not exaggerating.

The TPP, if passed -- and Obama is trying to shove it through Congress, and most Congressional reps haven't even been allowed to see the text -- the TPP if passed would override individual countries' regulations on pollution, consumer protections, labor policy, health care, pharmaceutical pricing, you name it.

The TPP would dictate our lives.

Say you were injured in an accident on the job, à la the Deepwater Horizon explosion and BP oil spill. Your country has laws in place saying you're entitled to compensation for your injury. Tough shit. The TPP would override those laws. The TPP would protect the corporation that harmed you, and you'd be outta luck.

And the TPP negotiations, going on at different sites around the world, between select corporations and select representatives of select governments, have been deliberately held in secret. As I said, even Congress hasn't been allowed to see the text. And it's supposed to vote on it! Activists have been privy only to a small number of leaks.

So the news today that WikiLeaks has released key documents of the TPP is profound.

And what we've already suspected is proven to be true: transnational corporations are champing at the bit to eviscerate national laws and regulations, people and planet be damned.

The TPP has been shrouded in secrecy from the beginning because the Obama administration knows that the more people know about it, the more they will oppose the agreement. The release of the full Intellectual Property chapter today by Wiikileaks confims what had been suspected, the Obama administration has been an advocate for transnational corporate interests in the negotiations even though they run counter to the needs and desires of the public.
This is not surprising since we already knew that 600 corporate advisers were working with the US Trade Representative to draft the TPP. This means that for nearly four years some of the top corporate lawyers have been inserting phrases, paragraphs, and whole sections so the agreement suits the needs of corporate power, while undermining the interests of people and planet.

Read the rest at the link.

And get on board by telling your Representatives and Senators that you oppose the TPP. And that you especially oppose Obama's attempt to "fast-track" it through Congress.

Oh, and by the way, don't buy Bill Keller's bullshit op-ed in the New York Times urging Obama to pass this heinous treaty. Remember -- Bill Keller is one of the guys who brought you the Iraq War.

Email ThisBlogThis!Share to TwitterShare to FacebookShare to Pinterest
Labels: economy, Obama, TPP, Trans-Pacific Partnership, WikiLeaks
Newer Post Older Post Home
"The man who asks of freedom anything other than itself is born to be a slave." -Alexis de Tocqueville