Another of my TSA News posts, originally published April 24, 2013: 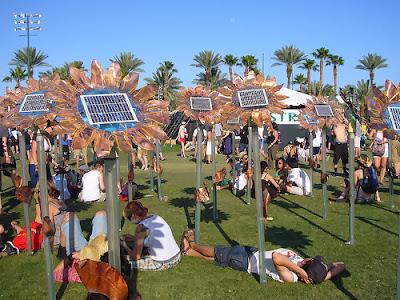 As some of us have been saying for years, and taking no end of shit for it from know-nothing observers, it was only a matter of time before the tactics of the TSA moved from the airport to other venues. And now that day is here.


From two sources, evidence that the genital-groping that is going on at the airport also went on at the Coachella Valley Music and Arts Festival. First, from Reuters:

The venue is surrounded by a veritable ziggurat of metal fencing and checkpoints. The full-body pat-downs begin about half a mile from the festivities. Girls to the left, where a female guard runs her hands up, down, even around the underside of their breasts. Men queue to the right, where they must empty their pockets, and turn their back to the guard and submit. Pockets, even wallets, are randomly searched.

Next, from this founding member (who goes by “nachtnebel”) of the travel chat forum Travel Underground:

. . . the butt, groin, and breast massages have not only damaged and violated us at our own airports, this disgusting behavior has spread out into the broader society and infected it. A colleague of mine was down at the Coachella music festival last week, and they had security people feeling up into your groin and massaging your butt just like the blue gloved *ssholes do at the airport.

But hey, as I always say, what’s a little sexual assault and unwarranted search and seizure among friends?
Everyone who has been blindly, dumbly, sheepishly complicit, if not outright supportive, of the TSA’s abusive procedures has brought this on themselves.
It’s always nice when people get what they ask for, don’t you think? Kinda like a birthday present.
(Photo: Rie H/Flickr Creative Commons)