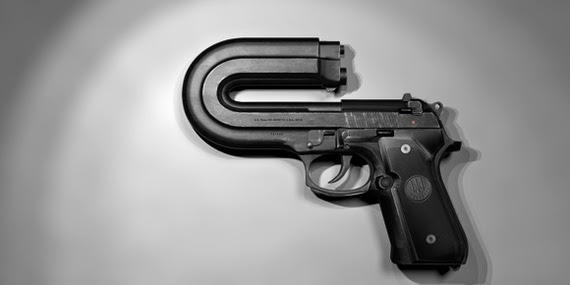 Ho, hum, another day in the USA, another goober with a grudge gets a gun and shoots up a school. Who can keep up anymore? I've already lost count of how many of these have happened in the past week alone. It's almost every day now. Other countries look at us like we're insane. And they're right.

Oh, oh, can't say that! Can't tell the truth! Can't admit that the gun laws in this country are insane! No, no, 2nd Amendment! 2nd Amendment! Your genitals get pawed at the airport because one mentally ill man lit his underwear on fire on a plane once, yet thousands of people are shot dead in this country every month and we just double down on our lunatic gun policies.

Sounds logical to me!

This time, it was in Portland, Oregon. Oh, but wait -- there was one in Las Vegas just a few days ago. Then there was the one in Santa Barbara a few days before that. Oh, and let's not forget about Seattle.

That's just for starters. Don't worry; there'll be plenty more before the month is out. Schools, malls, shopping centers, streets, wherever. This country has a record to uphold! We have standards! And Facebook is always there to help. It's the modern way!
Posted by Lisa Simeone at 5:31 AM

Email ThisBlogThis!Share to TwitterShare to FacebookShare to Pinterest
Labels: American values, crime, guns, violence
Newer Post Older Post Home
"The man who asks of freedom anything other than itself is born to be a slave." -Alexis de Tocqueville