TSA Blog: the Energizer Bunny of the Blabbosphere 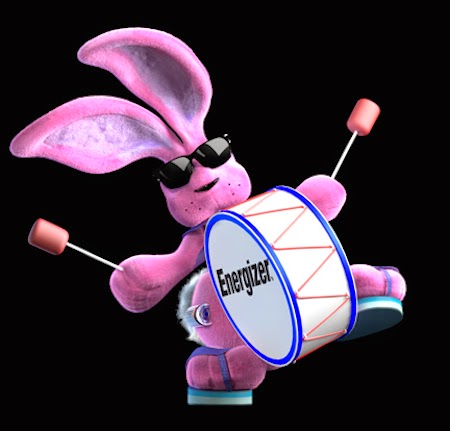 As regular readers here know, the TSA Blog, a.k.a. Propaganda Central, is the official on-line mouthpiece of the Transportation Security Administration. (There are, of course, lots of other, humanoid mouthpieces, as well.)


The TSA Blog is a darkly hilarious repository of jargon, PR blather, false assertions, omissions, and lies. Our tax dollars pay for a team of busy bloggers to churn out the propaganda day after day. Many of you are already familiar with Bob Burns, better known as Blogger Bob. We've written about him many times. He's partial to folksy locutions such as "things that go boom" and "a lot of sharp pointy things." This, you see, establishes his bona fides with the common man.

As I wrote in a comment here yesterday, "West" refers to West Cooper, who is a TSA agent in North Carolina. He writes at the TSA Blog under the moniker "GSOLTSO," which indicates that he is a "Lead Transportation Security Officer" at Piedmont Triad International Airport in Greensboro, NC.

He also posts at the travel chat forum FlyerTalk under the same handle. Here's his FlyerTalk profile.

Here's what I wrote yesterday about him:

West, along with Blogger Bob and others, comes up with those mind-numbing posts week after week, listing every knife, knuckle purse, and inert grenade that the TSA confiscates around the country. He is challenged constantly on the facts of his statements by commenters, yet rarely, if ever, addresses said comments. Mostly he just repeats boilerplate PR talking points.

He has, for instance, been asked repeatedly about nitroglycerine medication. Obviously this is life-saving medication for heart patients. His idiot colleagues at the TSA have been known to confiscate such medicine at airports, on the inane assumption that they can blow up a plane. No matter how many times West has been asked about this -- at FlyerTalk and at the TSA Blog -- he refuses to address it.

West reads TSA News. Yesterday, he saw that we were discussing his intransigence. Suddenly -- within minutes, in fact -- he answered the questions about nitroglycerine that had been posed to him for days at the TSA Blog. Of course, the answers were the usual brew of disingenuousness and tap-dancing (apologies for the mixed metaphor), which you can read here.

Not only do we have a right to know the people whose salaries we pay, but we should call them out for every lie and half-assed statement they make. Such calling-out happens regularly in the comments section at the TSA Blog -- that is, when the TSA blogger team allows comments to post. I stopped years ago trying to post comments under my own name, as I wrote about here, because my comments were invariably censored. Since then, I've taken to posting anonymously; those comments sometimes appear. This one, which I left yesterday at 6:57 AM, didn't:

Love this blog! The whole thing is an exercise in Orwellian doublespeak and inanity. I get suck a kick out of coming here every day and seeing the pointless crowing and corresponding comments by TSA shills. Is the USA a great country or what?!

If you have the time and inclination, you might want to stroll on over to the TSA Blog now and then, and leave a comment. It's an exercise in futility, of course, because you won't get any real answers. You will, however, get to see the crème de la crème of bureaucracy in action. West Cooper is a master of concern trolling. His words are simple, measured, direct, and perfectly calculated to come across as reasonable. He feels your pain.

But underneath, he is the same sneering, authoritarian apparatchik, intent on defending the indefensible and putting the boot to your neck.

Oh, and best of all, the sheer, witless irony in his personal motto, a quote from a cheesy movie, as stated on his personal pages and sprinkled throughout his comments in the blabbosphere:

"Fear profits a man nothing."

How delicious, considering that his entire agency was founded on fear and does everything in its power to keep that fear alive.
Posted by Lisa Simeone at 7:40 AM