Cops out of control -- again

It's becoming the norm in the USA -- heavily militarized police, brutalizing and murdering innocent people. Look at this picture. Look at this picture and tell me this is reasonable for a peaceful, non-violent protest, which supposedly we have the right to engage in in this country (as always, click to enlarge): 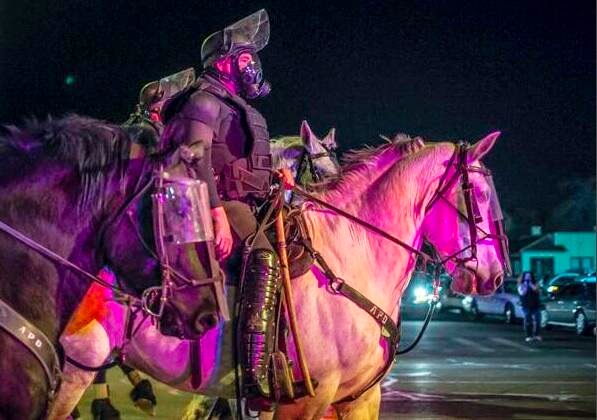 I mean, Jesus Christ, he looks something out of a sci-fi film. Or Ancient Rome + 21st Century. Unbelievable.

But nah, we don't have a problem with police brutality in this country. It's all just the product of my fevered imagination.

Police departments all over the country are getting grants -- paid for by you and me -- from the Department of Homeland Security to buy all kinds of insane militarized shit -- including armored tanks. What the fuck do you need armored tanks for in an American city??

Defense Department spokesman Mark Wright countered that the armored vehicles help not only in active-shooter situations but in natural disasters. He said there has been "vigorous interest" from local police in the 11,000 mine-resistant ambush-protected (MRAP) trucks that the Pentagon is giving away in the U.S. The trucks cost between $400,000 and $700,000 new and are free to communities, though local police have to pay to transport the vehicles and to maintain them so they will be ready whenever they are needed.
DHS allocated nearly $1 billion for grants to states and local governments in fiscal year 2010 to protect against potential terrorist attacks, with $6 million going to armored vehicles, the most recent figures available for spending on the vehicles.

Because of course, when you have a pumpkin parade, you need an armored vehicle. To keep the peace, you see.

But then, as I've been saying for years, it's poetic justice. That which we do to the other, we always, inevitably, end up doing to ourselves. And this country has been murdering and abusing people in other countries for decades. So of course the mayhem we've visited on others has come back to be visited on ourselves. It's a lesson as old as time itself. But too many Americans don't want to listen.

Read the story of the above photograph, from Albuquerque.
Posted by Lisa Simeone at 6:14 PM