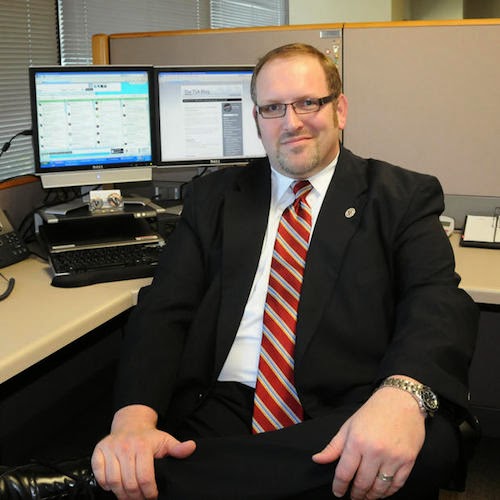 Today marks a milestone.
Another year has passed since we reported on the TSA's 50-million-dollar new uniform budget. You'll recall that it was the source of some controversy, though in the end, $50 million is a drop in the bucket of this agency's $8 billion annual budget.


Still, a penny saved is a penny earned. And the TSA, being the credible, responsible organization that it is, is always looking for ways to save money. Its managers know that they hold a sacred trust with the American citizens who pay their salaries, and ever mindful of that trust, they work tirelessly to keep it.
It's with those noble sentiments in mind that the TSA today announces a new program. It's already tried the Pre-Check program, but oops, that turned out to be a bust. And it's already tried placating parents and the elderly, by sometimes occasionally kinda sorta maybe perhaps not requiring children under 12 and adults over 75 to have their privates pawed -- though, of course, a "pat-down" may still be required to "resolve" any "anomalies."
The TSA has also instituted mood lighting, pastel colors, and Muzak (well, technically, Pandora) to try to soothe the frayed psyches of the passengers it pokes and prods along the way.
But the TSA never rests. Its leaders and promoters are always trying to come up with new ways to improve customer satisfaction.
So it is that the agency is rolling out today its new enhanced passenger experience, All Surround Security™.
Just as you're enveloped in a cocoon of sensory experience when you go, say, to the movies, so, too, will you be eased into a world of safety and security when you're handled by the TSA.
The first thing you'll notice when you enter the airport are big gleaming video screens with the smiling face of Blogger Bob. It is hoped that not only will this image, beamed throughout the airport, put you at ease, but also gently instruct you in the proper procedures as you progress on your journey.
No longer will clerks in blue shirts with fake badges bark and scream at you. Instead, TSA agents in pale pink polo shirts and khaki pants will greet you with a smile as you enter the checkpoint and direct you to the appropriate snaking, crowded line. As they take your shoes, belts, coats, jackets, scarves, electronics, dignity, and jewelry from you, they will gently place them in matching pink plastic tubs that are then whisked away on the new, improved silent conveyer belts to the x-ray machine.
As you stand in line waiting for your turn to stand in a pose of surrender in the play-acting scanners, a well-scrubbed TSA agent will beckon you with a smile. You're on!
Once through the machine, you may still, of course, have to undergo a "pat-down," since there is no guarantee, no has there ever been, that acquiescing to the scanner obviates a grope. But this is a petty detail. The important thing is that those big yellow footsteps painted on a rubber mat, on which you previously had to stand and spread your legs, have been replaced by a cheery Twister mat.
Not only will the colors brighten your day, but both you and your assigned TSA clerk will get a work-out, thus fulfilling the TSA's commitment to physical fitness as well as security. Plus, you might even get tickled.
Once you've finished with the game portion of your experience, you'll be directed to the Après-Humiliation Lounge™, where the TSA has thoughtfully placed soft benches and chairs, so that you can sit down and dress yourself in comfort. Then you can be on your way.
Don't forget -- always watching over you will be the big, bright, beaming face of Blogger Bob, talking to you, instructing you, cooing in your ear that this All Surround Security™ is just for you.
Posted by Lisa Simeone at 9:01 AM

Email ThisBlogThis!Share to TwitterShare to FacebookShare to Pinterest
Labels: airport, April 1st, Blogger Bob, humor, pre-check, satire, security, travel, TSA
Newer Post Older Post Home
"The man who asks of freedom anything other than itself is born to be a slave." -Alexis de Tocqueville