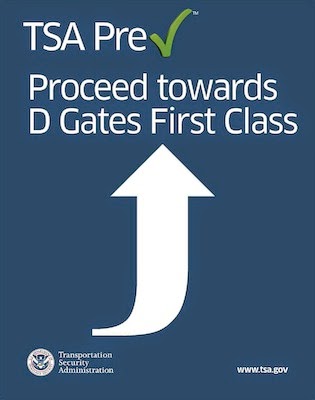 Another bs article about the bs program that is Pre-Check. And, of course, a discussion thread full of comments by the Special People o-woe-is-me-ing their fate. Pardon my impatience, but we've been writing about Pre-Check for over two years now, pointing out its fraud, and I do get sick of having to repeat the same things every time some ill-informed article appears in the mainstream media.

The latest bit of Pistole-packing propaganda is in the Wall Street Journal. Though I will say that the headline and subtitle gladden my heart:

["Lane" changed to "Line" mid-day, and now article is behind a paywall -LS]

Stirring traveler confusion and aggravation. Why? Because people are finally discovering what we've been trying to tell them from the beginning: Pre-Check doesn't work. Pre-Check is an extortion racket. In exchange for $85, you're trying to buy back your rights -- in itself an obnoxious and ethically indefensible thing to do. But the icing on the cake is that your protection money doesn't guarantee anything. As the TSA itself says, and as we have repeated hundreds of times, no one is guaranteed expedited screening. No one.

(I left a comment at the article; I encourage you to do likewise; the comments section isn't behind a paywall.)

Furthermore, when the lanes get crowded, the TSA simply shunts non-PreCheck people to the Pre-Check lines. So the great unwashed are clogging up the works for the Special People who've paid their $85 to supposedly go through screening unmolested:

"It used to be great, but recently the Precheck lines have been the slowest of all the lines," said Fred Van Bennekom, who teaches operations management at Northeastern University and has timed TSA lines out of curiosity. "Sometimes there's almost no one in regular lines and we're all backed up at Precheck."

Cry me a river.
TSA Administrator John Pistole, meanwhile, thinks it's all a big joke:

"It's one of the last great bargains the U.S. government is offering," TSA Administrator John Pistole joked at an enrollment-center opening last week at Dallas-Fort Worth International Airport.

This is the man who instituted the Reign of Molestation. This is the man who thinks it's okay that you and your children are scoped and groped because you might be Big Scary Terrorists.
Oops -- I forgot: because of the outcry over children and old people being molested, Pistole threw us a bone:

"I want passengers, when they think of TSA, to think of something positive instead of patting down 95-year-old grannies or taking teddy bears away from children," said Mr. Pistole. He said that since taking office he has made more than 20 policy changes, many to reduce the intrusiveness of screening, especially for children, older people, and active-duty military.

Something positive. Right. Because now the blue-shirted crusaders only abuse people between the ages of 13 and 75. That's positive! And "20 policy changes" -- ooh, impressive! What, pray tell, are those policy changes? Pistole doesn't say. Presumably confiscating peanut butter, cupcakes, perfume, and iPads are a few of them.
The whole reason for Pre-Check to begin with was to try to tamp down criticism of the TSA. It has nothing to do with security. The airlines already have all the info they need on you when you book a ticket. Pre-Check was a way to play Divide-and-Conquer, as these experienced travelers also pointed out:

Reply by FliesWay2Much:
Yep -- this was the TSA's objective all along and it has worked like a charm. I've written before that Precheck is no different than the Communist system of privileges. They doled them out as necessary to instill loyalty to the government and the fear of it, because the people lived with the fear that the government could withdraw those privileges at any time for any reason. Living in fear of the government is a good thing -- if you're the government.

Although I disagree that it has worked like a charm. As the recent WSJ article -- and others like it -- indicate, people are catching on to the Pre-Check scam. And to the money that it's costing. This program can't fail fast enough. Now if only John Pistole would be fired and criminally prosecuted.

Ah, well, a gal can dream.
(Graphic courtesy of your tax dollars)

Cross-posted at TSA News
Posted by Lisa Simeone at 8:26 AM

Email ThisBlogThis!Share to TwitterShare to FacebookShare to Pinterest
Labels: abuse, airport, fraud, John Pistole, pre-check, security, travel, TSA
Newer Post Older Post Home
"The man who asks of freedom anything other than itself is born to be a slave." -Alexis de Tocqueville