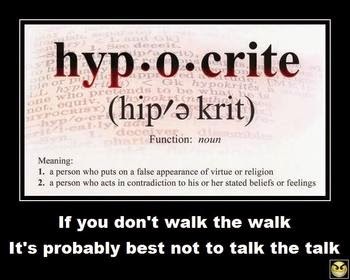 As I wrote on March 12, 2014, Dianne Feinstein is a hypocrite. She was fine with the egregious, relentless spying on us peons by the "intelligence" agencies, but got her knickers in a twist when that spying was suddenly turned on her.

It's the same with hypocrites everywhere: it's always okay when other people take it on the chin; it's just not okay when you or yours do.

Now Feinstein is once again buddy-buddy with that son of a bitch liar James Clapper. For she and her partners in crime on the Senate Intelligence Committee have eviscerated a bill meant to make the U.S. take responsibility for the murders it's committing via drone. The bill wouldn't have stopped those murders, mind you, which the president, every Tuesday, orders to be committed (sorry, Obamabots, I know the truth still won't wake you the fuck up).

No, the language in the bill would only have required that the president reveal to the public information about his murder victims. But now that language has been struck from the bill, thanks largely to Dianne Feinstein.

The Guardian has confirmed that Senate leaders have removed the language as they prepare to bring the bill to the floor for a vote, after the director of national intelligence, James Clapper, assured them in a recent letter that the Obama administration was looking for its own ways to disclose more about its highly controversial drone strikes.
“The executive branch is currently exploring ways in which it can provide the American people more information about the United States’ use of force outside areas of active hostilities,” Clapper wrote to the leaders of the Senate committee, Democrat Dianne Feinstein of California and Republican Saxby Chambliss of Georgia, on 18 April.

. . . The removal of the drone transparency requirement is the latest in a pattern by legislators to preserve the status quo surrounding the strikes.

In other words, the Senators are cowards in addition to being criminals.

Never mind that hundreds or thousands -- we have no way of knowing how many -- innocent civilians have been pulverized by drone strikes in Afghanistan, Pakistan, Yemen, Somalia, and god knows where else, never mind that these are war crimes -- Dianne Feinstein and her colleagues support them.


“How many people have to die for Congress to take even a small step toward transparency? It's stunning that after all these years we still don't know how many people the Obama administration has killed with drones,” said Zeke Johnson, the director of Amnesty International’s security and human rights program.

And those of you who still, still, support this president, after everything you see that he's done, that he's doing, these murders in your name, you're the worst kind of hypocrites. Because you pretend to stand for humane values. You pretend that because you have a "D" instead of an "R" after your name on your voting card, that means you're somehow more noble, more virtuous, more caring. "Oh, I support gay rights! Look how enlightened I am!" When all it means is that you're a patsy. You're a slave of the Dem/Repub false dichotomy. You're willing -- even eager -- to be snowed by any sweet-talking, charismatic charlatan who comes down the pike. Even as he's killing people.

I've said it so many times I sound a broken record: someday, there will be a reckoning. The U.S. will be made to pay. And it will, as usual, throw up its metaphorical hands and wail, "Why, oh why do they hate us?!"
Posted by Lisa Simeone at 4:03 PM