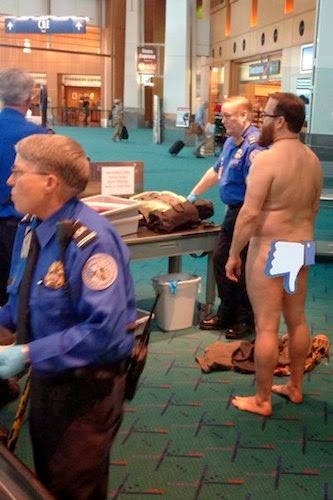 We have an update on the case of John Brennan, the man who stripped naked at a TSA checkpoint in April of 2012. We first wrote about Brennan here. We then providesd updates here, where he said he wanted a trial, and here, where he was found Not Guilty of "public indecency."

But not content with that ruling, the TSA pushed on, charging Brennan with "interefering with the screening process." This week, a judge sided with the TSA:

WHEREFORE:
IT IS HEREBY ORDERED, after consideration of this record, that a violation of 49 C.F.R. § 1540.109 is found PROVED and a civil penalty in the amount of five hundred and dollars ($500) is ASSESSED.

Granted, it was a reduction of the fine the TSA wanted ($1,000), but it still doesn't favor Brennan. The judge in the case is the Hon. George J. Jordan, a U.S. Coast Guard Administrative Law Judge (don't ask me what the Coast Guard has to do with anything).
As Brennan reports on his aptly named Facebook page, Naked American Hero, he's planning to appeal. From his press release of a few days ago:

. . . Brennan expects an unfavorable decision, but believes his actions will not be the cause. The Aviation and Transportation Security Act of 2001 removes Constitutional defenses for defendants at the initial hearing phase of the legal proceeding. Said another way, jurisdiction of Federal judges for ruling on Constitutional defenses has been removed by the TSA. Mr. Brennan was using his affirmed First Amendment right to protest violations of his percieved 4th Amendment rights. If Mr. Brennan loses this round, he will appeal. TSA contends that disrobing posed a security threat. TSA videos of the event are available.
The decision on the civil charges of interfering with the screening process arrives nearly two years after Mr. Brennan’s protest.

Thanks to Jeff Pierce of Freedom to Travel USA (FTTUSA) for alerting me to this development.
Posted by Lisa Simeone at 10:06 AM

Email ThisBlogThis!Share to TwitterShare to FacebookShare to Pinterest
Labels: 4th Amendment, airport, Civil liberties, John Brennan, protest, resistance, security, travel, TSA
Newer Post Older Post Home
"The man who asks of freedom anything other than itself is born to be a slave." -Alexis de Tocqueville