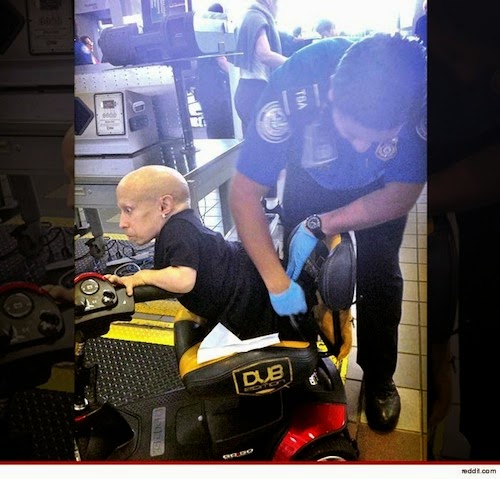 Since I was away for three weeks, I missed a lot of TSA stories. They didn't get reported at TSA News, either, so forgive me for being late to the party.

Several people sent me this story of American actor Verne Troyer being assaulted by the TSA. Troyer tweeted a photograph that his manager, Ray Hughes, had taken at the airport. I'm surprised the TSA didn't surround Hughes and scream at him that he wasn't allowed to take pictures, which is a lie TSA clerks often spew.

Troyer portrayed the character Mini-Me in the "Austin Powers" movies. Here's the news account from PressTV. You may recall that William Shatner and other celebrities have also been singled out for abuse.

I dearly wish for every TSA defender and apologist out there to be similarly humiliated.
Posted by Lisa Simeone at 10:30 AM

Email ThisBlogThis!Share to TwitterShare to FacebookShare to Pinterest
Labels: abuse, airport, assault, Austin Powers, crime, film, Mini-Me, security, travel, TSA, Verne Troyer
Newer Post Older Post Home
"The man who asks of freedom anything other than itself is born to be a slave." -Alexis de Tocqueville