Be afraid, be very afraid! TSA (and its ilk) to the rescue! 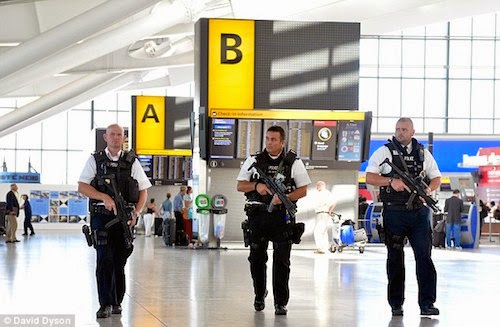 Well, I'm finally back from three weeks away. Judging by the lack of posts at TSA News, the civil liberties watchdog site I run, I guess it was a quiet time on the TSA front.

In the never-ending quest of our overlords to ramp up the fear factor, a method of exerting control over a populace from time immemorial, we now have the latest Big Scary Terroristy Threat to consider. And just in case you don't realize how serious it is, the media is standing by with screaming headlines to remind you. A sampling:

Fears terrorists will target planes with computer and human bombs

Flights to U.S. Face Scrutiny After Threats Are Reported

Holiday chaos looms in air terror alert: Hunt for "invisible bomb" maker who has already turned his own brother into a suicide bomber


UK tightens security over fear of smuggled "UNDETECTABLE bomb" created by Muslim fanatics
(Hey, geniuses, if it's undetecable, then how the hell are more intense searches going to detect it??)

Anyway, the gist, from the NYTimes, is this:

The Department of Homeland Security has tightened passenger screening on many United States-bound flights from Europe, Africa, and the Middle East in response to intelligence reports of an increased threat from Al Qaeda’s affiliate in Yemen, officials said Wednesday.

The heightened efforts will be carried out at about 15 airports overseas but not in the United States, the officials said. The Department of Homeland Security has provided intelligence and information about the new security measures to airlines and foreign governments. It did not provide details.

Foreign airports have to meet a series of requirements from the department and the Transportation Security Administration for the screening of cargo and passengers on United States-bound flights. The United States helps perform passenger screening at some airports.

I saw all this firsthand yesterday, as I was at Heathrow in London waiting to fly back to the U.S. I had gone to Europe three weeks ago on the Queen Mary 2, the transatlantic ocean liner; it's now the only way I can travel abroad since I refuse to fly in/from the U.S. because of the abusive thugs of the TSA. I've never had a problem flying in/from other countries. But all of that is about to change.

Thanks to the relentless hysteria (of our own making in more ways than one) over terrorism, other countries have started to buckle under to U.S. demands. The U.K., a lapdog to the U.S. for years, fell right into line.

As it happened, my husband and I were approached by a reporter yesterday. Boy, did he get an earful. His name is Ryan Wilkinson. He writes for a wire service, which is why his report was picked up and rewritten at UK newspapers under other by-lines. You can see the quotes attributed to me in those articles at the links above.

Luckily, my husband and I simply went through the metal detectors We didn't even remove shoes or belt (nor did I reveal the many little bottles and tubes of liquid cosmetics I was carrying -- I never tell security figures about those -- I learned my lesson years ago when they all got thrown away by TSA clowns). But I witnessed several "pat-downs" and much phony swabbing for explosives, including on a baby stroller (called a "pushchair" in British English). By the way, I saw no strip-search scanners. The "scanners" mentioned in the articles must be referring to the standard x-ray belt machine.

Some of the pat-downs are now full-scale TSA-style gropes. This is completely different from what was going on just a year ago, when I also passed through Heathrow. It's clear that the American TSA is now calling the shots for foreign governments. Unbelievable to me that other countries are putting up with this shit. As I've reported before, this buckling-under isn't entirely new. But it's getting worse.

Tell me something -- if "body-bombs" are really in the offing, why aren't we all getting cavity searches??

After all, can't be too safe! Rather undergo "a little inconvenience" than get blown up! Better to get touched than never to get to your destination at all! Because . . . Terrorism™!

(Photo by David Dyson)
Posted by Lisa Simeone at 9:51 AM