I know the human race is fucked up. I know this. I get it. But every time you think you've seen it all, something comes along to show you that you haven't. And that you never will. Since the human imagination is limitless, human depravity likewise knows no bounds.

This is from a Facebook page. Though I'm not a member of Facebook, I can still see the page.

As background, Kim Jensen lives in Baltimore, coincidentally not far from me. She is married to a Palestinian man and they have two children. They sometimes visit their relatives, for which they must pass through Israel, where they have to jump through hoops and are usually treated like shit. Their son has been roughed up by Israeli authorities. I realize none of this is surprising to people who know what's going on over there; I'm just providing it as identifying info on Jensen, whose name you'll see in this excerpt. For those who may not know, IAF stands for Israeli Air Force:

July 24
From Zein El-Amine: "Just when you think that they are as grotesque as they can get, Zionists raise the bar. Here a Facebook page set up by women who are promising sex as a reward for ethnic cleansing. One woman talks about rewarding the IAF if they reach "the 2000 mark". The page has over 4000 likes and Facebook has not removed it yet. But Facebook will remove a video of non violent action by Palestinians."

Meanwhile this is how Israeli women are showing their support to the Israeli occupation soldiers who are committing war crimes in gaza - they even have a Facebook page where they are offering their bodies...
http://on.fb.me/1rNKAMy


Obviously there are many comments. One man left this comment:

John Herrera Reminds me of the Vietnam nam draft resistance movement, when there was a similar move. At that time the slogan was "women say yes, to men who say no"to the draft. It's never right
July 24 at 7:04am

Nora Ashour Shabib Omg, they are so disgusting - I looked at the site - the translation on the pic that you showed says once they get 2000 marks (assuming that means kills) they would get something "special"! B$&t3$!
July 24 at 7:13am


If you want a good source on the ground for info on the horrors being perpetrated by Israel in Gaza, all with U.S. support I might add, here's Eva Bartlett. If you want some critical analysis, which you sure as hell won't get in American mainstream news, read Chris Floyd here and the revamped Common Dreams website here. Lisa Goldman has an excellent column in the Globe and Mail. Here are Israeli soldiers speaking out and reservists refusing to serve. Here's Glenn Greenwald pointing out the similiarity between the words of Benjamin Netanyahu and those of Josef Goebbels. Read it and weep.

Of course, the U.S. is the lone hold-out in a UN vote trying to get an inquiry into the Gaza massacre. Just an inquiry. This country is run by hypocrites and populated by many of the same.

I just found out The Daily Beast has written about this. Here's the picture accompanying the mind-bogglingly witless article: 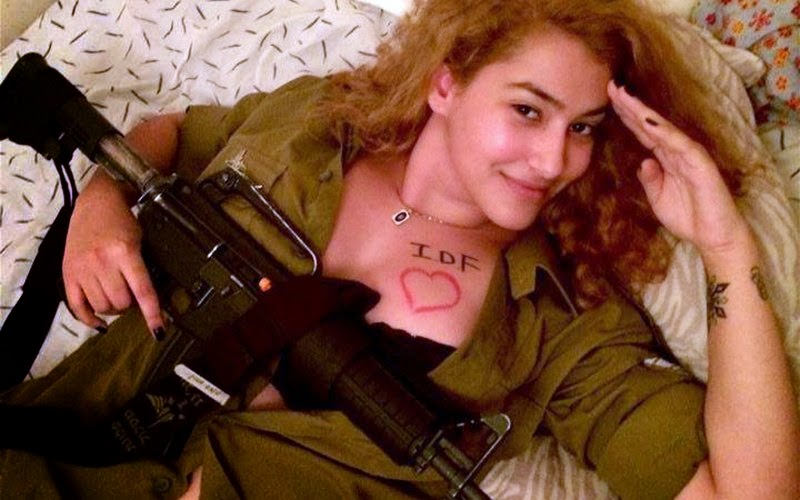 Some readers are telling me that the first photograph in this post isn't showing up on their screens. I don't know why. It's a photo of a woman's legs, from the thighs down, with her underpants pulled down to just below her knees, with a tattoo (temporary or permanent I have no idea; it's irrelevant) of "IDF" plus a red heart. The underpants are leopard print on a blue background. There's a pink towel with black script all over it covering her feet. I can't read the script. Is it Hebrew? Arabic? I don't know. The towel is kind of bunched up. There's also some open jar of I-don't-know-what positioned on the floor between her knees. If it's not showing up on your screen, just go to the link I've provided -- see above -- it says "the page". It's a hyperlink. It takes you to the Facebook page.

UPDATE July 27, 2014: Facebook appears to have taken the page down. Or maybe the settings have been changed. Here's what you get when you click the link:

The page you requested cannot be displayed right now. It may be temporarily unavailable, the link you clicked on may have expired, or you may not have permission to view this page.