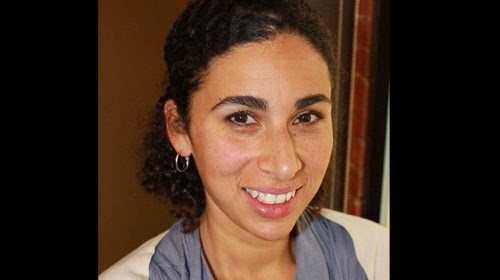 We’ve written about Shoshana Hebshi twice here at TSA News and about the hideous, Kafka-esque injustice she suffered at the hands of the United States government, via our friendly abusers at the TSA, Frontier Airlines, and law enforcement, aka the police.


You can read those accounts here and here. In a nutshell, Shoshana Hebshi, an American citizen, was taken off a plane, in handcuffs, jailed, and strip-searched, for the crime of . . .
Well, she committed no crime. She wasn’t even suspected of committing a crime. She was merely swarthy-skinned and dark-haired. She’s half Arab and half Jewish (oh, the horror!). And she was flying on September 11, 2011. Therefore, she was a terrorist. Q.E.D. (Sarcasm alert for those who don’t get it.)
Hebshi sued the TSA and Frontier Airlines (no word on whether she also sued the Nazi wannabe who strip-searched her and who actually told her, in a line so dystopian it sounds like a sick joke, “You understand why we have to do this, right? It’s for our own protection”). The American Civil Liberties Union helped Hebshi, and, in the time-honored tradition of U.S. jurisprudence, it’s taken years for her to get some small measure of justice.
But is it really justice? On the one hand, yes. As the ACLU indicates in its update:

. . . today, a federal trial court decision in Shoshana’s case reminds us of that truth. Judge Berg wrote, “The fact that the events occurred on the tenth anniversary of September 11th, on a flight bound for a city previously targeted for a terrorist attack, does not absolve the WCAA Defendants, or any law enforcement officers, of their responsibility to conduct their police work in compliance with the United States Constitution.” He further wrote that the court would not “sacrifice these principles of liberty to the cause of hyper-vigilance.”

(By the way, WCAA stands for Wayne County Airport Authority.)
On the other hand, the tepid ACLU account, with its motivational-poster, wishful-thinking headline, doesn’t indicate that anything has changed. There’s no mention, for instance, of the men who were on the plane with Hebshi and who were likewise abused — we have no idea what’s happened to them. There’s also no indication that anything has changed for Hebshi and people like her, people like any of us. Sure, one judge has ruled that Shoshana Hebshi shouldn’t have been treated as she was, but so what?
Where are the repercussions? Where are the consequences for those who abused her? Where are the assurances that this won’t happen again? When history and common sense tell us it will happen again? What happens next in the lawsuit(s)? What says the TSA? What says Frontier Airlines?
Even the headline is disingenuous: “Making Flying While Brown Safe Again.” In a word, bullshit. Ask folksinger Vance Gilbert, a man I know personally, if it’s safe to fly while brown. Ask these people. Steve Bierfeldt, a white man, also sued the TSA, as we’ve written about several times, and also wrote an account that either he or the Huffington Post titled similarly — “How My Lawsuit Against the TSA Made Airports Safe for the Constitution Again” — also similarly disingenuous, since the TSA continues to do precisely what Bierfeldt claims his settlement assured they wouldn’t do anymore.
Maybe somebody with the patience to read the whole Hebshi legal ruling will chime in. I confess I don’t have such patience — especially with the deliberately obfuscatory legalese. I’m reading and linking to the ACLU account, which is written for the general public, and I don’t see any assurances there.
Now that I think of it, since most people don’t click links (hey, I understand — time is limited), I’m reprinting below an excerpt from Shoshana Hebshi’s original account. And I repeat what I’ve written before: she got attention because she’s an educated, privileged citizen, with a voice to publicize her case. Those strangers sitting next to her? And the thousands of other people in this country who aren’t similarly privileged? We rarely read about them. Their stories of injustice don’t get publicized. They just live with the consequences, in jail or elsewhere, silently, unprotected, unchampioned, while the rest of us go on about our lives.
From Shoshana Hebshi’s original account. I have bolded certain passages:

I sat down on the metal cot that hung off the wall. It had a thin, green vinyl mattress–mattress is a generous term–that offered no comfort. It was about a 6-by-10 cell, the concrete walls were painted a light yellow but were streaked with black dirt. The floor was some sort of stainless steel, and a stainless steel toilet that has probably never seen the good side of a scrubbing brush, instructed me to keep holding my stretched bladder as long as I could. Near the ceiling above the toilet there was a video camera.
A plainclothes officer stood came to my door and asked me if I spoke English. Something in me snapped at that question. Of course I spoke English I’m an American citizen, you asshole! Well, I left the expletive out.“Ok,” he said and stood watch outside my door saying he wanted to make sure I didn’t “flush anything.” He also wouldn’t tell me what was going on.
As I sat and waited, quietly contemplating my situation, the other Indian man was getting questioned in the main room outside. I couldn’t see what was going on, but I could hear a bit. They asked him where he was from, did he have any family, where were his shoes. He talked quietly and agreeably. I wondered if he was as incensed as I was or if he had entered this country expecting harassment from the American authorities.
They took him to another room, and I heard an officer tell him to remove his clothes. He was going to be searched. I could not fully grasp what was happening. I stared at the yellow walls and listened to a few officers talk about the overtime they were racking up, and I decided that I hated country music. I hated speedboats and shitty beer in coozies and fat bellies and rednecks. I thought about Abu Ghraib and the horror to which those prisoners were exposed. I thought about my dad and his prescience. I was glad he wasn’t alive to know about what was happening to me. I thought about my kids, and what would have happened if they had been there when I got taken away. I contemplated never flying again. I thought about the incredible waste of taxpayer dollars in conducting an operation like this. I wondered what my rights were, if I had any at all. Mostly, I could not believe I was sitting in some jail cell in some cold, undisclosed building surrounded by “the authorities.”
I heard the officers discuss my impending strip search. They needed to bring in a female officer. At least they were following protocol, or something to that nature. Still, could this really be happening?
Eventually a female uniformed officer came in. She looked like a fat Jada Pinkett Smith, and in a kind but firm voice explained what was going to happen. I was to stand, face the wall in a position so the camera above the toilet couldn’t see, and take off my clothes. I complied. She commented on my tattoo, saying, “Oh you have one of those things–good and evil, right?”
“Yin and yang. Balance,” I said, grabbing my clothes to redress.
“You understand why we have to do this, right? It’s for our own protection,” she told me.
Because I am so violent. And pulling me off an airplane, handcuffing me and patting me down against a squad car didn’t offer enough protection. They also needed to make sure all my orifices were free and clear.