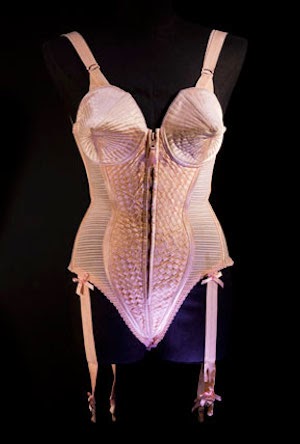 I was in New York a few weeks ago and had a chance to see two stunning exhibitions that are still going on, one until February 23rd and the other until March 9th. They’re completely different from each other and completely captivating, each in its own way. Warning, though, that the crowds can be a turn-off, a problem with blockbuster shows in general. So if you can swing it, better to go during a weekday, particularly early in the day.
The first is the Jean Paul Gaultier exhibit at the Brooklyn Museum of Art. Almost 150 of Gaultier’s famous, irreverent designs are on display. And the manner of display is so weird and uncanny, you could be forgiven for feeling as if you’d lost your footing.

Because many of the mannequins appear to be alive.
In fact, at first, you’re sure that they’re actually tableaux vivants. You keep staring and dodging and changing your position, and even when you know they can’t possibly be alive part of you is still sure they must be, because their eyes seem to dart and follow you. But it’s an illusion. An illusion created by the dozens of carefully placed projectors that beam facial expressions onto the mannequins. It’s quite unnerving. And, frankly, gimmicky. You could enjoy the playful, intricate, meticulously crafted clothing just as well without the high-tech “wow, look what we can do!” factor. 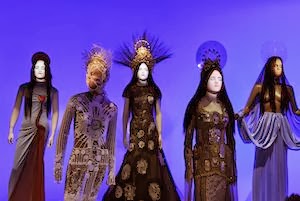 More unnerving, however, is the behavior of the patrons. How many damn cellphones do you people need?? Are you here to see an exhibition, or just record it on your phone to prove that you’ve seen it? Because, in fact, you’re not seeing it. You’re pretending.
So intent are people on capturing the event rather than experiencing it, that they don’t even know what they’re looking at. In this, they resemble tourists all over the world. Watch them. They don’t actually examine what they’re looking at. They don’t walk along the length of an intricately embroidered train, for instance, to marvel at the workmanship that went into it. Instead, they just snap a picture and move along.
News flash: I’m here to see the exhibition, not to facilitate your picture-taking. I’m not going to step out of your way so you can get The Perfect Shot. That’s not what I paid for. If you’re so determined to document every second of your life, do it on your own time. And do the decent thing and buy postcards and prints and books in the museum shop. Not to mention, you’re not even allowed to take photographs in the exhibition! Hello??! 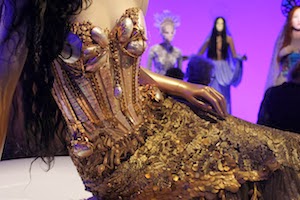 The crowds at the Jewels by JAR exhibit at the Met were somewhat more subdued, though there was still prohibited picture-taking going on. Again, do the right thing and support the museum in the shop. Put your cellphone/camera aside. (I wish they’d confiscate the damn things before allowing patrons in. People should have to check them like they do their coats.)
Fabricated by American designer Joel Rosenthal, the jewelry on display here is so breathtaking, so exquisite, you’re hard-pressed at times to even believe you’re looking at metal and stone. The butterflies seem to flutter, the tulips almost fragrant. How can human hands create such intricate, dazzling little miracles? You will find yourself gasping in awe. The fact that the room is darkened, with the jewels displayed in individually lit boxes, like sacral totems, makes you feel as if you’re in a house of worship. 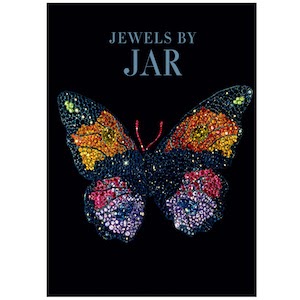 The Met has taken quite a bit of criticism for mounting this exhibition, the sentiment being that the museum is shamelessly plugging a commercial enterprise. I think the criticism is unwarranted.
Look, museums are struggling in this country. Always have been, always will be. In a so-called “free market” economy (which is anything but), many worthwhile endeavors suffer. The arts, an integral part of human nature and human sustenance, receive a lot of lip service but little if any official civic support. Too often they’re looked upon as trifles, fripperies, not essential to the functioning of a healthy society. Which is about as far from the truth as you can get. And funny how communities always depend on artists to be pioneers, to re-invigorate portions of a city that have fallen into crime and disrepair, to spur business investment. Yet they’re not deemed worthy of public support. Contradiction much?
In other words, I don’t blame museums for trying to attract audiences in whatever ways they can (well, almost whatever ways; as with everything, there are limits).
If you have a chance to go to New York before either of these exhibitions end, do go see them. They are compelling reminders that even amidst the on-going brutality and horrors of the world, beauty can still flower and still inspire. 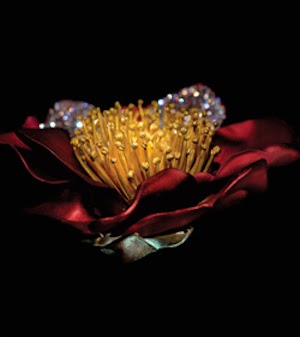 Email ThisBlogThis!Share to TwitterShare to FacebookShare to Pinterest
Labels: art, beauty, fashion, Gaultier, Glamour Girl, Joel Rosenthal, museums
Newer Post Older Post Home
"The man who asks of freedom anything other than itself is born to be a slave." -Alexis de Tocqueville