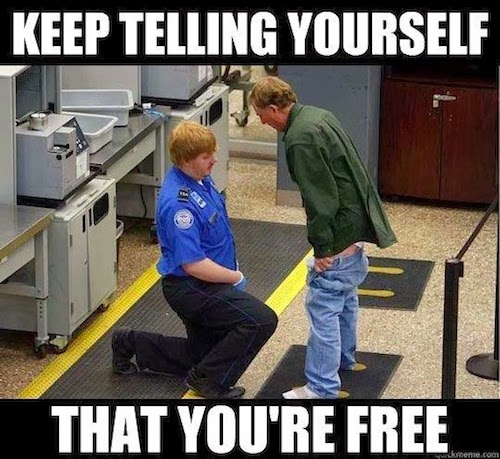 In the on-going sordid history of TSA agents bullying, harassing, robbing, and sexually assaulting people, we have a new story, this time about a cancer survivor.

The man is 36 years old and suffers from an overactive bladder because of a past bout with prostate cancer. Therefore, he wears an adult incontinence garment -- a disposable brief -- something that hundreds of thousands of people are familiar with in this country, especially with our aging population.

In the past, according to his wife, he has always traveled with no problem, passing through both scanners and "pat-downs." This time, however, things were different:

“After he emerged from the scanner the TSA officer (a female) asked if he was carrying liquids in his clothing. He explained his condition and what had happened. In the past, it was embarrassing enough for him to just tell a TSA employee that [he] was wearing an adult incontinence garment but now he was also announcing that he had wet himself.)
“She called over to another (male) officer (the boss, I guess) and explained the situation to him out loud in front of everyone else still going through the line. The problem was he did not understand what an "incontinence product" was when she told him. Myself, [the husband], and the female TSA employee tried explaining a few times before the woman finally just shouted ‘ HE IS WEARING A DIAPER’ which caused pretty much everyone to turn and stare at us (smaller airport so not that many people).”

According to the man's wife, one of the blue-shirted wonders then snickered.
But it got worse. The TSA clerks then pulled out their favorite trick, the coup de grâce of sadism and humiliation: they took the man into a private room. Four new TSA clerks got in on the action:

He then told us that the scanner was unable to tell what was under his clothing and that "further review" was required. I asked him what that meant and he asked us to get our bags and follow him. We were taken through an office area into a  room in the back. After waiting a couple of minutes 4 new TSA officers came in and one asked DH if he had any liquids in his pants. By now we were both getting quite annoyed with being asked the same question over and over and he replied that he was wearing a diaper and that he had pi---d in it while waiting in their ***** line. Probably wasn't the best idea for him to get that mad but at that point he didn't even care about people knowing he had a medical condition and we just wanted to get out of there.
They then patted him down and asked him to drop his pants when they felt the "suspicious padding" around his waist. After finally seeing the diaper, one of the officers said that he would need to “change out of it” to “clear the issue." He got his spare brief out of my carry-on, a female officer came up and gave him a large Ziploc bag and they left  the room while he changed. She returned, collected the bag with the wet brief and went off for about 5 minutes. The group of officers then returned and told us that we were cleared and showed us to the door. On a positive note, I must say that all of the TSA agents, except for the one who loudly yelled "he's wearing a diaper" in front of  the entire airport security line, were courteous, professional, and apologetic for the intrusion.
Quite possibly one of the most embarrassing times of mine and DH's life and my DH cried following it which is a very very rare occasion for him. We had a 4-hour layover and 5 hours of air travel yet ahead so that played in to it.

If you're not reminded of Leonore Zimmerman, Ruth Sherman, Lena Reppert, Nina Gilkenson, Carolyn Durand, and Michelle Dunaj -- not to mention tens of thousands of others -- you should be.
A word of advice, again, that we've given so many times before: if you insist on flying, never, ever agree to go into a private room. You do not have to acquiesce to be taken into a private room with these people. Demand that your pat-down assault be performed out in public, where everyone can see what's going on. Otherwise, as should be obvious, you're setting yourself up for further abuse.
I don't know what to say anymore to a country full of people who think this behavior is just fine. To people who continue to defend this indefensible agency and its criminal actions. And I don't know what's sadder and more infuriating -- the fact that this goes on in this country, or that even its victims say they "understand" why it's going on. They laud the people who humiliate them as "courteous, professional, and apologetic."

Frustrating that people have to go through this in the name of security. We have neither security nor freedom now, just lots of embarrassing and frustrating stories. I understand it to an extent because of the underwear bomber a few years ago, but still yikes. I'm just happy the boys weren't with us for the sake of DH's sanity and humility.

But then, as I've written so many times, one of the most pernicious effects of authoritarianism is that it engages its victims as complicit in their own abuse.
This country is one big Stanford Prison Experiment. Only this time, it's not ending after six days.
(Cross-posted at TSA News)
Posted by Lisa Simeone at 7:53 AM