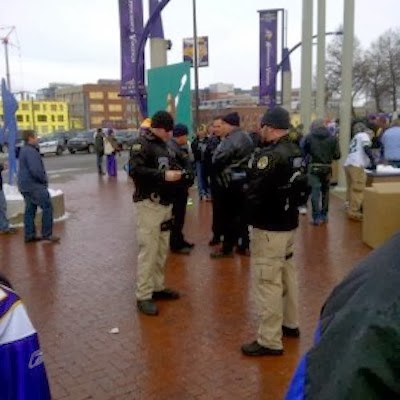 In their continual quest to invade all aspects of our lives, our alphabet-soup security agencies will be on the prowl today at Met Life Stadium in New Jersey. For the gladiatorial combat known as the Super Bowl will be taking place there, and our overlords don't want the players on the field to be the only ones showing some muscle.

Officers from the Department of Homeland Security, the Federal Bureau of Investigation, and, of course, our friends at the TSA will be searching ("randomly," a favorite post-9/11 buzzword) football fans. Those fans, apparently, are so eager for this over-hyped annual display of bloodlust that they're willing to subject themselves to whatever the authorities decree. And the authorities have decreed that "screening" will begin miles away from the stadium, before fans even get there.

The security perimeter, in other words, is expanding. Which some of us have been predicting for years.

On Super Bowl Sunday, federal and state agencies plan to check all bags at Secaucus Junction for an expected 15,000 New Jersey Transit passengers headed to the Meadowlands station, which sits a few yards from the stadium. Because the station is so close to the stadium, passengers will be screened one stop before.

But wait a minute, the fun has already started! It actually started earlier this week. Even for people who have nothing to do with football and aren't going to the hallowed game, "an event of national significance." Oooh, impressive.

Some of the earliest signs of increased security will be visible Wednesday when the additional screeners will conduct random checks of baggage for travelers using Amtrak, New Jersey Transit, and Metropolitan Transit Authority trains from hubs such as New York's Grand Central and Penn stations and at Secaucus Junction, TSA spokesman Ross Feinstein said.

That's right, the VIPRs have been slithering and crawling all over the place for the past five days. If you're an ordinary person just going about your business, you could be subjected to a search. Even the vaunted  Behavior Detection Officers could pull you aside for questioning.
Because we live in a Free Country, you see, and in a Free Country, we have to occasionally stomp on your freedoms to provide the contrast to show you how free you really are. Get it?
The Stasi were pretty good at this sort of thing. Never let it be said that we don't learn from the best.
Major League Baseball has gotten in on the action; the National Football League couldn't be left behind. Truth be told, both the MLB and the NFL have been subjecting their fans to "random searches" for years. No biggie, right? After all, If You Have Nothing To Hide, You Have Nothing to Worry About™.
Maybe, if you're lucky,  you'll see some feats of derring-do, like this one that took place in Chicago last year. Wow, that would be exciting!
Oh, well. Perhaps it's fitting that the forced conformity of a certain national pastime is accompanied by the forced conformity of behavior leading up to it. Then again, it's not really forced. Fans are choosing to go along with it. They are choosing to subject themselves to every new "security" procedure that comes down the pike. No one is forcing them to buy tickets to the game. No one is forcing them to support the NFL. They are choosing to do so.
And just as passengers at airports are willing to subject themselves to degrading procedures in favor of "convenience," so, too, are tens of thousands of sports fans whose only concern is The Big Game. If a few rights get trampled along the way, well, it's a small price to pay.

(Cross-posted at TSA News)
Posted by Lisa Simeone at 5:29 AM

Email ThisBlogThis!Share to TwitterShare to FacebookShare to Pinterest
Labels: American values, DHS, FBI, football, NFL, security, sports, travel, TSA, VIPR
Newer Post Older Post Home
"The man who asks of freedom anything other than itself is born to be a slave." -Alexis de Tocqueville