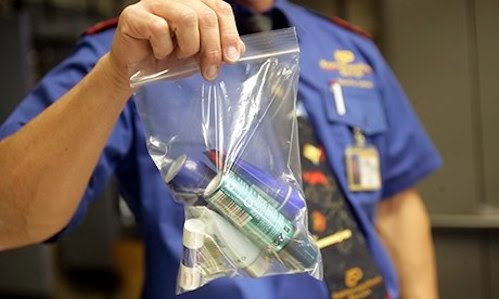 As I so often say, you can't make this stuff up. Reality is so absurd, so surreal, that anything you could come up with in fiction would pale in comparison.

The TSA's latest brilliant innovation (not incuding protecting us from Terrorist Toothpaste and Terrorist Hairspray and Terrorist Baby Powder, that is) comes in the form of a plastic bag.


You're no doubt already familiar with the Magic Baggies that have been de rigeur for years, even back in the days when I still flew (though I never bothered pulling them out for the nitwits at the checkpoint, preferring instead to leave them in my carry-on, where they always safely passed through "security"). You can thank Kip Hawley for the Magic Bomb-Proof Baggies, his shining achievement.

Well, now the Magic Baggie has a counterpart -- one that's supposedly more convenient for you and that just happens to make millions of dollars for the companies that manufacture it.

Ladies and gentlemen, I bring you the "Secure Tamper-Evident Bag" -- the STEB: 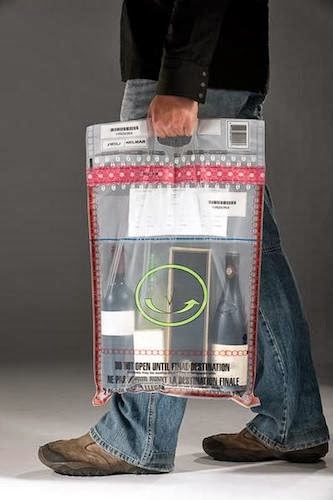 Now, for just a few bucks (cents?), you can transport your duty-free liquor, perfume (and maybe even Terrorist Toothpaste) in a handy-dandy heavy plastic bag with all kinds of writing and diagrams and insignia on it that prove you're not transporting explosive contraband. Note: must be from the duty-free store. These STEBs been approved by the International Civil Aviation Organization, and several corporations are getting in on the action:

Montreal-based NELMAR Security Packaging Systems, Inc. is one STEB manufacturer. It started making STEBs shortly after a thwarted terrorist plot in 2006, to blow up planes bound from the U.K. using liquid explosives. Today, NELMAR supplies the bags to some 25 operators of duty-free shops around the world.
STEBs are an outgrowth of NELMAR’s other business line, secure plastic bags for transporting cash, documents, and other valuables in armored cars for the retail and banking industries, and narcotics for the pharmaceutical industry. Much of the same technology goes into its STEBs.

But don't think you're getting your wine and perfume through the checkpoint with no hassle. No, no, your STEB still must be "inspected" by the TSA. And we all know how brilliant and discerning they are, seeing as how they can't tell a cupcake from a purse from a watch from a bomb:


The TSA notes that liquids in sealed STEBs still need to be inspected at TSA checkpoints, using the same scanners already in use for liquid medications and breast milk. Liquids that cannot be screened in these scanners – such as those in opaque, ceramic, or metallic containers – will not be allowed in carry-on baggage.

Feeling nostalgic for that Magic Baggie? Don't worry -- you still have to carry it on:


There is no change other regulations governing the small (3.4 ounce) bottles in quart-sized plastic bags in carry-on luggage.

Cross-posted at TSA News.
Posted by Lisa Simeone at 11:35 AM