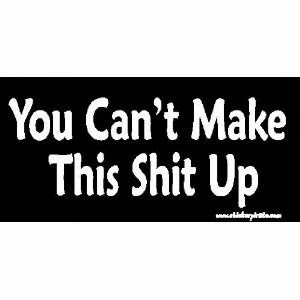 As I wrote two days ago, our DHS overlords were fretting about Terroristy Toothpaste Bombs. Well, now their paranoia is complete: along with their bumbling handmaiden, the TSA, they've banned all -- all, mind you -- toothpaste, deodorant, hairspray, baby powder, and whatever other liquid, aerosol, powder, gel personal grooming substances you can think of, from carry-on luggage for flights headed to the Olympics in Sochi, Russia. (And let's not forget those terrorist cupcakes!)


Ah, so the Big Scary Terroristy Toothpaste and Terroristy Deodorant and Terroristy Hairspray and Terroristy Baby Powder, all of which "could" contain "explosive material" can get thrown in the hold with all the other unscreened luggage that also gets tossed in there. Then they can all get jostled together for one big Happy Bomb!

Oh, but no, say the DHS chemist-geniuses, you don't understand; those Terroristy Things must get mixed together in precisely the right proportions to make a bomb, and that can't happen in the hold of a plane. It's only when they're carried on board that they could be dangerous. Because in those tiny airplane bathrooms, you see, there's a magnanimity of space for all kinds of nefarious doings.

Why, it's a potential meth lab! It's a veritable Breaking Bad in the sky! And I'm not talking about the Mile High Club!

I've said it before and I'll say it again: you can't make this shit up.

This country is so far off its rocker (that means, for my foreign readers, this country has gone crazy) that I don't see how there's any coming back. There is nothing -- nothing -- too insane, too paranoid, too hysterical, too just plain stupid for this country not to do in the name of the so-called War on Terror™.

I can't wait for the day when some mentally unbalanced person tries to light his hair on fire and then we'll all have to get shaved before boarding a plane (well, you all will; I've stopped flying in this country). Given that 1/3 of Americans say they'd be just fine with a body cavity search before boarding, I'm sure shaving will be no big deal. (By the way, I have it in writing from a seasoned journalist that he would be in favor of body cavity searches as long as everyone had to go through them. Yes, you heard that right.)

I believe this whole toothpaste thing is also a way to stick it to the Russians. The criticism coming out of the U.S. over the past few weeks has been relentless. Here's yet another way to cast a pall over the Sochi Olympics while ramping up the fear factor, the latter always a boon to authoritarians and profit-makers in the "security" industry.

Everyone who has ever defended the TSA, its rules, its practices, its absolute farce of security deserves what he gets. And to paraphrase H. L. Mencken, he deserves to get it good and hard.
Posted by Lisa Simeone at 8:55 AM