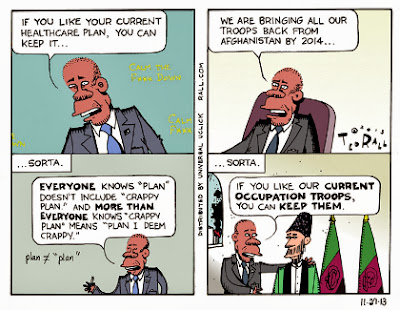 As you know, I'm a great admirer of political cartoonist Ted Rall. I've done many posts on him and his brilliant, scathing political cartoons (click the tag "Ted Rall"). Along with Mr. Fish, he's one of the most provocative and truthful cartoonists out there.

Which truthfulness and provocation, of course, makes them both ripe for attack.

And attack is what's happening to Rall right now, thanks to the hypocrites and Obamabots of Daily Kos.

So it's not surprising that Daily Kos, repository of all things supposedly liberal, has turned against Ted Rall. Because Daily Kos -- like thousands of similar sites -- isn't actually liberal; it's lock-step with the Democratic Party. It's a haven for Obamabots. It's not about independent thinking. It abhors independent thinking. It is, again like so many of its counterparts, just as blinkered and narrow-minded as the rightwing it loves to excoriate.

In other words, two peas in a pod.

The latest kerfuffle is over Ted Rall's rendering of Obama. It is, according to Daily Kos, "racist."

Never mind that Rall has been drawing Obama the same way for almost five years. Now suddenly it's racist.

He supposedly makes Obama "look like a gorilla." (Project much?)

It would appear that Daily Kos readers need a lesson in a few things, namely:

1. The nature of political cartoons. They are caricatures. Duh. Sure looks like the white guys and the black guys are drawn the same to me -- same jutting jaw, same square face, same overhanging lip.

2. The nature of satire. It's a form of humor to make a point. It has a rich literary and artistic tradition. For good reason. (Ever heard of Jonathan Swift?)

3. The nature of free speech. Sometimes you won't like what's being said. Tough. When you attempt to censor, you are no better than the crazy rightwing fringe that loves to do the same -- the book banners, the language nannies, the "civility" monitors.

4. The nature of race. It exists. Don't belittle black people by pretending that they can't take the barbs of satire that everyone else is expected to take. Talk about condescending.

5. The nature of Ted Rall. He has 30 years of political cartooning behind him. Do you even know any of it?? Or do you just throw out your little knee-jerk "racist" (or "misogynist") accusations at the drop of a hat?

But the saddest part of this whole affair is, I'm sorry to say, Rall's reaction. Instead of standing up for himself and his reputation, he's buckling under. I couldn't believe it when I read his statements in this interview with The Progressive. Excerpts:

"Obviously if there's even one person who is legitimately troubled by something that I have drawn or written, it worries me and bothers me and I want to do something about it. So I may well end up changing the way that I draw Obama in the future."
(Editor's note: Shortly after this story's publication, Rall said he would start drawing President Obama differently to avoid any potential for confusion in the future.)

That's the point of free speech. It's going to trouble some people. Tough shit.

As I've written before, I was lucky enough to meet Rall at the Occupation of Freedom Plaza in Washington, D.C. in October 2011. I was and remain impressed by his intellect, his grasp of history, his talent, his fearlessness. But wow, this capitulation is very disappointing.

Don't buckle under to bullies. Don't bow to p.c. pieties. Political correctness is one of the most pernicious forms of censorship, because it couches itself as "inclusive" and "sensitive" and "caring." Just because it comes from the ostensible Left doesn't make it good.

The answer to speech you don't like, people, is more speech, not less!


UPDATE: A few hours after I posted this, a friend sent me Rall's latest salvo. And I must say, Bravo! (I vote for the drone-man.)
Posted by Lisa Simeone at 9:53 AM