DOJ backpedals on claim that Guantanamo searches are like TSA’s 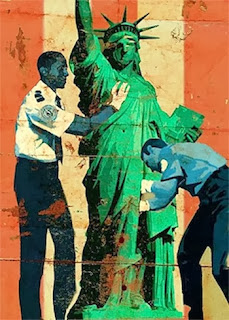 This past summer, a U.S. judge issued a rare ruling on the side of justice and the rule of law. Then, just as quickly, his ruling was appealed by the Department of Justice (sic) and overturned.
I wrote about that case here, in a post called “Guantanamo’s Prisoners Groins Protected; Too Bad Yours Aren’t.”


Now that case is in the news again, as Josh Gerstein of Politico tells us:

A Justice Department attorney acted Friday to clarify a claim he made in court earlier this week that searches of Guantanamo prisoners heading to meet with their attorneys are comparable to searches the Transportation Security Administration performs of travelers at U.S. airports.
The analogy was offered by DOJ lawyer Edward Himmelfarb Monday as a three-judge panel of the U.S. Court of Appeals for the D.C. Circuit heard arguments on several lawsuits filed by detainees who complained that new search procedures are too intrusive and discourage them from meeting their lawyers. Detainees and their lawyers say the searches are particularly repugnant to the prisoners because they’re Muslim and the intrusion of their genital areas offends religious commandments regarding modesty.

“I would like to clarify that while the search procedures employed at Guantanamo bear some general similarities to patdown procedures employed at airport security checkpoints, the two sets of procedures are not identical. Although the Transportation Security Administration’s patdown procedures cannot be publicly disclosed in detail…they differ in certain key respects from the searches conducted at Guantanamo,” Himmelfarb wrote. “I regret any confusion my statements may have caused.”

Whether Himmelfarb wanted to “clarify” his remarks or was made to, I don’t know. I do know, however, that his initial statement was true, and that there’s no way his bosses could’ve liked it.
It’s also significant that Himmelfarb corroborated what we here at TSA News have pointed out repeatedly: “the Transportation Security Administration’s patdown procedures cannot be publicly disclosed in detail.”
And why is that? The TSA would have you believe that it’s because we can’t reveal our secrets to The Big Scary Terrorists. When in fact it’s because the TSA doesn’t want to admit outright what hundreds of thousands of passengers have personally experienced: a TSA “enhanced patdown” is genital groping. Some TSA clerks will grope more, some less. But the point of the patdown is to paw your privates, on the pretext that oodles of people are packing explosives.
After all, we have to placate TSA administrator John Pistole’s fear of exploding underpants.
Sexual assault, or the threat thereof, has been used by regimes throughout history as a means of control. Whether in prisons or anywhere else, the point is humiliation. The point is control. The point is to tell you who’s boss. This tactic isn’t new. What is new is that it’s now being used routinely in the United States for people just trying to go about their business, and millions of those people are just fine with it.
But hey, why fight? After all, if it’s inevitable, why not, as Bobby Knight counseled, relax and enjoy it?
I encourage you to go over to Politico and leave comments.
Posted by Lisa Simeone at 9:11 AM