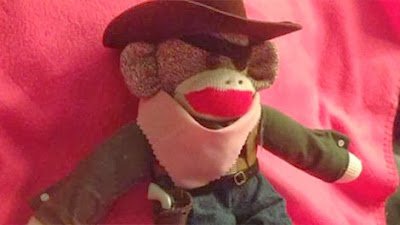 “Appalled and shocked and embarrassed”?
That’s one way of putting it.
That’s how Phyllis May of Redmond, Washingon described her reaction when the brainiacs of the TSA seized a little cloth sock puppet — sock monkey, to be exact — in her bag and discovered the monkey’s nefarious intent:


May and her husband were going through the screening process when she noticed that one of her bags was missing.
“And the (TSA agent) held it up and said ‘whose is this?’” she said. “I realized oh, my God this is my bag.”
May said the TSA agent went through the bag, through the sewing supplies and found the two-inch long pistol.
“She said ‘this is a gun,’” said May. “I said no, it’s not a gun it’s a prop for my monkey.”

“She said ‘If I held it up to your neck, you wouldn’t know if it was real or not,’ and I said ‘really?’” said May.
The TSA agent told May she would have to confiscate the tiny gun and was supposed to call the police.

Again (and again and again) I say, you can’t make this shit up.
The TSA is populated by morons. It wouldn’t be so bad if they were just morons. Because then we could just laugh at them. Unfortunately, many of them are also criminals. And I don’t think theft, harassment, and sexual assault are laughing matters.
I sympathize with Phyllis May, but perhaps she, and millions of other Americans, should be “appalled and shocked and embarrassed” about everything else the TSA is doing – and everything it represents — rather than about the routine idiocy of its agents.
Look for this “gun” to appear in the weekly count of Big Scary Terroristy confiscations by Bloghdad Bob and by the thousands of journalistic suck-ups in American media.
(Photo courtesy of Phyllis May; more photos of “Rooster Monkburn” at the link)

Cross-posted at TSA News.
Posted by Lisa Simeone at 6:43 AM

Email ThisBlogThis!Share to TwitterShare to FacebookShare to Pinterest
Labels: airport, guns, security, stupidity, travel, TSA
Newer Post Older Post Home
"The man who asks of freedom anything other than itself is born to be a slave." -Alexis de Tocqueville